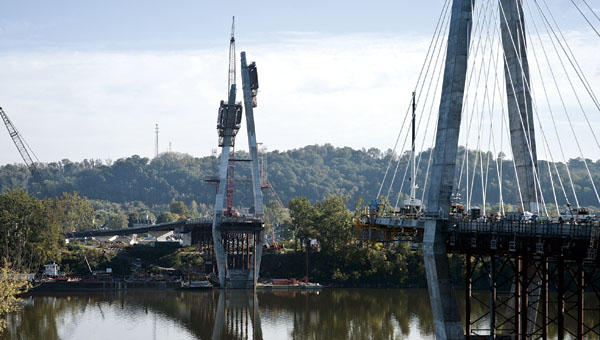 The new Ironton-Russell Bridge being constructed.

Despite bad weather plaguing the construction of the Ironton-Russell Replacement Bridge, progress is being made.

“Slowly but surely it is coming along,” said Kathleen Fuller, public information officer for District 9 of the Ohio Department of Transportation. “The Kentucky tower is completed and we are making progress on the Ohio tower. It is three-fourths of the way finished.”

Of the 18 segments on that tower, crews from Brayman Construction Corporation are close to finishing segment 15.

“All of the other piers and abutments and approaches are 100 percent completed,” Fuller said. “Now what is happening is we are working on the main span of the bridge.”

On the Kentucky side there are 14 segments of the cantilever with four completed.

“They have not started on the Ohio cantilever segment,” Fuller said.

Construction of the approximately $82 million structure began on March 5, 2012, and was funded through ODOT’s Major New Bridge Program. The main structure will have 120 steel cables with that span featuring two Delta-shaped towers of re-inforced concrete.

Originally the state estimated cost of the bridge at $99 million with the lowest bid coming in $11 million more. That sent the state back to a redesign where the number of towers was changed and a sidewalk was removed.

Before winter weather hit, the bridge was to open in late 2015. But in the spring of 2015 ODOT announced that date was pushed to 2016.

“Overall everybody knows we are behind,” Fuller said. “ We have roughly more than 230 lost work days due to weather. You lose the day for weather. They can’t skip ahead and do something else. One bad weather day can set you behind two or three days.”

The 2016 race for one of the seats on the Lawrence County Commission may turn into a six-man contest, if... read more