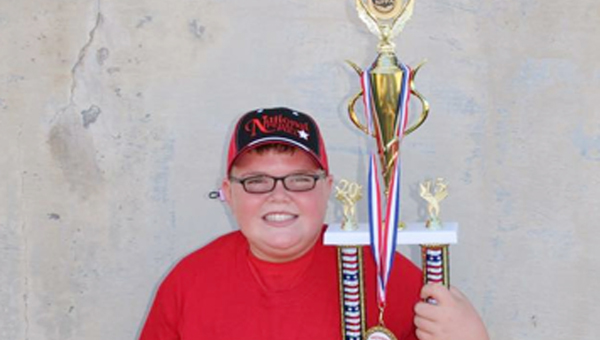 Hunter Barber won first place in the 9-year-old boys’ Pedal Tractor Pull at the Lawrence County Fair in July which allowed him to compete at the Ohio State Fair in August.

Barber then took the opportunity to place first in the Buckeye State Kiddie Pedal Tractor Pull, thus earning a berth in the National Championship Qualified Puller.

The nationals were held in Mitchell, South Dakota, at the Corn Palace on Sept. 26. Barber competed against 38 other qualifiers.

Barber pulled a distance of 36-feet, 1-inch that earned him a second place finish in the National Pedal Pull Championships.

This was first time Barber qualified to compete in the national Pedal Tractor Pulls.

Barber was escorted to South Dakota by his grandparents Mike and Becky Cline. He is a fourth grade student at Rock Hill Elementary.