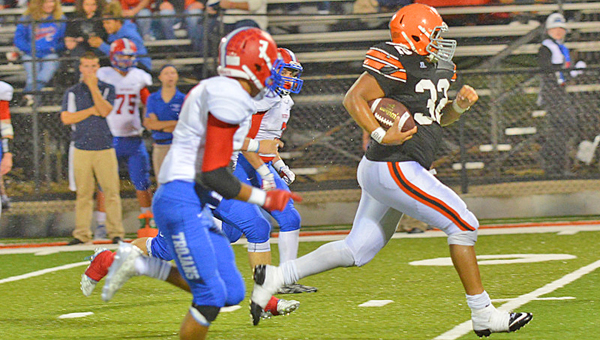 Another week, another showdown in the Ohio Valley Conference.

It all started the first week of the OVC schedule and it continues again this Friday when the Ironton Fighting Tigers visit the Chesapeake Panthers.

Chesapeake needs a win to force a tie in the league race and to keep their playoff hopes in Division VI alive.

Both teams have strong running games and tough defenses. Panthers’ coach Andy Clark said the figures tend to point toward a defensive struggle.

“What you think will happen doesn’t always go that way. When you get two running teams like that, tough, hard-nosed, you get defensive games,” said Clark.

“Ironton’s going to prepare for us and do a good job. It usually calls for low scoring, but you never know.”

Chesapeake’s running game has some eye-popping numbers. All five backs have rushing averages of more than 7 yards a carry and the Panthers average 7.2 yards as a team. They have scored 264 points for an average of 33 points a game.

“They have a lot of good backs. Their quarterback looks like their best player. He runs the option well and he can pull up and throw the ball effectively,” said Ironton coach Mark Vass.

“They have some impressive wins. Their only loss was to Rock Hill in overtime. Rock Hill is a pretty good team but Chesapeake lost three fumbles in the game. You do that against a good team and it’s hard to win.”

Chesapeake quarterback Casey McComas has 96 carries for 693 yards and 10 touchdowns while fullback Maccoy Brown has 95 carries for 690 yards and six scores to lead the ground game.

Freshman Ty Wilcoxon has 411 yards on 54 carries and three TDs, J.W. Bartrum 365 yards on 51 carries with eight touchdowns and Will Scott 179 yards on 19 carries and two scores in five games.

McComas doesn’t have to throw very often, but when he does he is successful. The junior signal-caller is 17-of-30 for 310 yards and four touchdowns.

Austin Oldaker had seven receptions for 110 yards and two scores while Austin Browning has three grabs for 101 yards and a score.

The Panthers’ defense has been more than stingy led by linebacker Brad Meadows — a four-year starter.

Sexton and Johnson are the tackles with Marlowe and Brendan Meadows the ends.

Chesapeake has give up just 855 yards rushing on 238 carries for a 3.6 average. Opponents are 45-of-85 passing for 574 yards and the Panthers have 11 interceptions.

“The (Brad) Meadows kid does a nice job for them. He’s pretty good,” said Vass. “But their defense has some speed and they run to the ball well.

The Panthers have allowed just 62 points including a 9-3 win over Alexander (7-1) who is currently third in the Region 17 Division V computer ratings.

Ironton averages 5 yards a carry led by fullback Desmond Young with 703 yards on 124 carries for a 57 average. He has scored 13 touchdowns.

Much like McComas, quarterback Jake Isaac doesn’t pass often. He has thrown for 336 yards and two touchdowns.