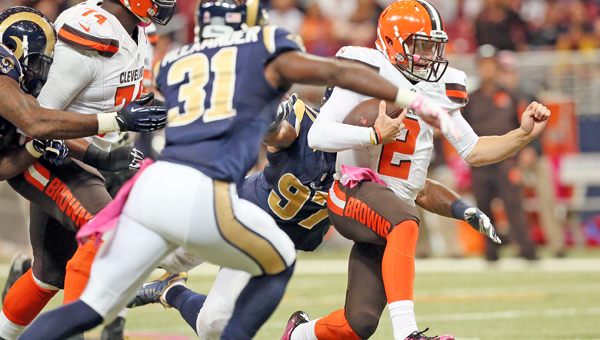 ST. LOUIS (AP) — Cleveland quarterback Josh McCown was pounded by the St. Louis Rams and ran into a wall.

It was that kind of day for the Browns.

McCown threw for 270 yards before he left with a shoulder injury, and Cleveland lost 24-6 at St. Louis on Sunday.

“Anytime your quarterback is being evaluated for an injury, you are always concerned,” Browns coach Mike Pettine said.

McCown was favoring his right shoulder when he left for the locker room with about four minutes left. He said he was hurt on the second of William Hayes’ two sacks and strips on the day.

“I felt something in the back of my shoulder,” McCown said. “Again, I’m not going to comment anymore on that.”

McCown also was left holding his head after he got hit on another play, but stayed in the game. Asked if he was surprised he was allowed to keep playing, McCown responded: “I don’t know. I try to think about what is going on in the game, so I didn’t really process that.”

Johnny Manziel came in for Cleveland’s final drive and was 4 of 5 for 27 yards. He also rushed once for 5 yards.

Manziel said he will be ready if the team needs him Sunday against Arizona.

“If Josh goes out, I’ll be able to step in and try to make something happen,” he said.

Manziel fielded just as many questions about an ongoing NFL investigation as he did the possibility of starting against the Cardinals. The league is looking into whether he violated its personal conduct policy.

Manziel was questioned on Oct. 12 by police in Avon, Ohio, after the 2012 Heisman Trophy winner and girlfriend Colleen Crowley argued while he drove on a highway. Crowley told police that Manziel hit her several times.

Manziel denied striking Crowley, was not arrested and the couple was allowed to leave together. He said he hasn’t talked to an NFL official.

“That’s a situation that’s ongoing with the league,” he said. “When they do come, if they do come, I’ll fully cooperate and give them exactly what happened that day from my side of the story. That’s all I’m going to say.”

Manziel has admitted to drinking alcohol a few hours before his argument with Crowley, who police said was intoxicated. He spent 10 weeks in a rehab facility during the offseason for an unspecified condition.

The Browns (2-5) have publicly supported Manziel, who has continued to practice since the incident.

Taylor Gabriel and McCown fumbled on the Browns’ first two possessions, and the Rams turned the miscues into a 10-0 lead. Travis Benjamin fumbled following a 20-yard reception in the fourth quarter, and Gurley scored on a 16-yard run to make it 24-6.

“It is a pretty simple formula to lose,” Pettine said. “Turn the ball over three times resulting in 17 points. Commit (nine) penalties and a lot of them were self-inflicted.”

NOTES: Browns kicker Travis Coons connected from 25 and 44 yards, extending his streak to 14 field goals without a miss. … Cleveland TE Gary Barnidge had six receptions for 101 yards despite having a tooth knocked out and his lip stitched at halftime. Barnidge became the fourth tight end in Browns history to record three 100-yard receiving games in a season. … Browns WR Andrew Hawkins was evaluated for a concussion in the fourth quarter, and DB Jordan Boyer got an X-ray on his shoulder after the game. … The Browns have gone 19 consecutive games without a 100-yard rusher and totaled 82 yards on 24 attempts for a 3.4-yard average. Robert Turbin led the team with 30 yards on five carries.

The Associated Press   Utah dropped from the ranks of the unbeaten and so did Florida State. The two losses... read more