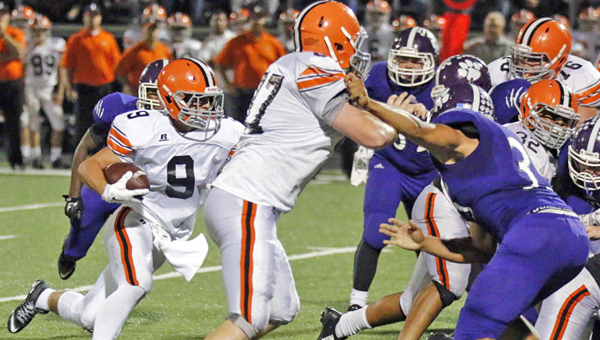 Ironton Fighting TIgers’ running back Garrett Carrico (9) follows the block of Ryan Bryant (87) as he gains yardage in last week’s game at Chesapeake. Ironton plays at South Point on Friday in the regular season finale. The Fighting Tigers can lock up the Ohio Valley Conference title outright with a win. (Tim Gearhart of Tim’s News & Novelties, Park Ave. in Ironton)

Been there, struggled through that.

Injuries have ravaged the South Point Pointers this season, something that relates to Ironton Fighting Tigers’ head coach Mark Vass.

Ironton went through a similar situation two years ago when the Fighting Tigers had a small senior class and injuries sidelined half the starting lineup. They also struggled early this season with some key injuries.

“It’s tough to go through something like that. You feel for someone who has to go through that, but on the other hand you have to worry about your own team and to make sure they are prepared,” said Vass.

Ironton (5-4, 5-0) needs to worry about winning Friday when the Fighting Tigers visit the Pointers in an Ohio Valley Conference game.

The Fighting Tigers can lock up the OVC title outright with a win and probably put them in the Division V postseason playoffs.

“There’s a lot at stake. We’re not going to take this game lightly,” said Vass.

South Point has slumped to 2-7 overall and 1-4 in the league.

“They’re young, but they’ve been playing so they a some been gaining some experience,” said Vass.

Napier is the nose guard, Allison and Koukos the tackles, and Eplion the other defensive end.

Jim Walker jim.walker@irontontribune.com   This game doesn’t really mean much. You’ve got to be kidding. Regardless of what’s at stake,... read more