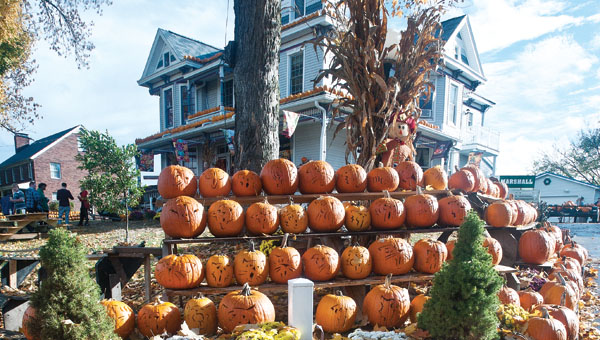 The Kenova, West Virginia, Pumpkin House, owned by Ric Griffith, is located at 748 Beech St, and will be on display through early November.

The Tri-State fall tradition of Ric Griffith’s pumpkin house, on Beech Street, will be in full display Saturday night for Halloween after weeks of getting ready.

Griffith and his pumpkin house have been featured on HGTV, the Travel Channel, Ellen and the Today Show and thousands gather each year to see the attraction.

Griffith said he started the tradition just carving pumpkins for his daughters in 1978 when they were young and it grew each year until moving into the current house in 1991, when the pumpkin house, as it is known today, began.

“The first year we carved about 500 pumpkins,” Griffith said. “Then it began to grow to the point where it was 2,000 pumpkins in 2000 for the new millennium. My main volunteers jokingly complained about the number of pumpkins, so we did 3,000 the next year. That’s about how many we still put out today.”

Griffith and his volunteers set up about 500-600 pumpkins a day for few days leading up to the full display being completed.

The pumpkin carvings range in design from cats carved to form a choir, to states and countries.

“At the beginning of September, we start setting up the shelving,” Griffith said. “At the end of September, the pumpkins are delivered.”

Griffith said a farmer in Proctorville grows all of his pumpkins every year in a variety of sizes for what is needed to decorate the house. He also takes great pride in not wasting anything from the pumpkins used by giving it back to farmers to feed animals.

Countless volunteers of all ages help out with the pumpkin house to make it what it is, something Griffith said he is very thankful for.

“People just walk into the backyard and ask how they can help. It’s an amazing thing to me that so many people travel so far to see it and to volunteer,” Griffith said. “I’m blessed by that. It wouldn’t be possible without that help.”

Griffith, owner of Griffith and Feil Pharmacy and previous mayor of Kenova, said what the pumpkin house brings to other people means more to him than the display itself.

“To me, the neatest thing is the reaction of people, not the display,” Griffith said. “I love the display for what it is, but I have met people from all over the world come here specifically for this. Seeing their reaction makes all of the work that goes into it all worth it.”

The pumpkin house is a free attraction and Griffith said it should be up until Nov. 4 or 5 depending on weather.