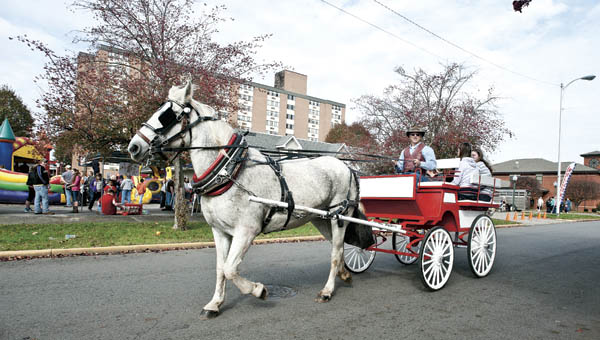 Bill Roach gives rides up and down Railroad Street in Ironton,

Blindfold secure and hands behind her back, 6-year-old Addyson Gray munched down the doughnut hanging from the string without giving herself a powdered sugar moustache.

The doughnut game was one of several that children lined up for at the second annual block party hosted by the Family Life Worship Center on Saturday.

There were inflatables, a cakewalk, life-sized bouncy balls to scoot around in and hot dogs and hamburgers. And everything was free.

“We want to reach out to the community,” said Brenda Munson, wife of pastor Todd Munson of the worship center. “People are having a hard enough time.”

The first block party in the fall of 2014 brought out more than 1,800, and organizers were planning on as many, if not more, this year.

As children played games and families had free lunches, Bill Roach and his dappled gray carriage horse took visitors on rides up and down railroad street.

Near the games was a tent filled with winter coats, hats and scarves.

Donations came from members and those just aware of what the church is trying to do.

Lawrence road projects set for 2016 CHESAPEAKE — Work on the drainage project on Rockwood Avenue is about halfway finished... read more