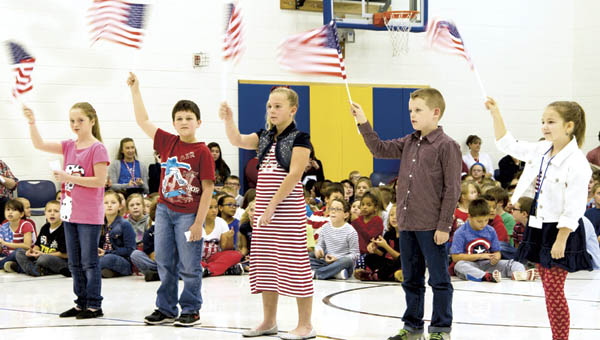 Students perform in the Veterans Day program at Burlington Elementary School on Tuesday.

BURLINGTON — Veterans and military members were celebrated for their service by students at Burlington Elementary School on Tuesday.

The school has put on a Veterans Day event for some time, but starting last year, began hosting the event on a far larger scale.

“There are some things you can’t get from textbooks or tests,” assistant principal Michael Clay said of the event. “These life lessons are important.”

Students filled the school’s gymnasium, while veterans and active service members took a seat on stage.

The program kicked off with the Pledge of Allegiance and a group of students singing the national anthem, followed by opening remarks from Clay.

“Today we return the favor and show our thanks to veterans,” he said.

Students then heard from military speakers David Moske of the Veterans of Foreign Wars USA and LTC Clydellia Prichard-Allen, the first female battalion commander for the Columbus, Ohio Recruitment Battalion.

Prichard-Allen spoke of her service and specifically addressed the girls among the students.

“You go out and make a difference and say, ‘Hey, I can do it just as easy as any of my male counterparts,’” she said. “Take a moment to figure out what you want to do. There’s a higher calling for everyone.”

Following the remarks from the stage, the program turned to the student audience, where the children took turns showing their appreciation of veterans.

Students sang patriotic songs, such as “Yankee Doodle Dandy,” “Sing a Song of Peace” and Woody Guthrie’s “This Land is Your Land.”

Then, two service members demonstrated the proper folding of an American flag, while a group of students explained the significance and symbolic meaning of each fold made.

Near the program’s end, the results of the school’s penny drive were presented, in the form of a check for $416.37 to the Wounded Warrior Project, a charity and veterans service organization that works to aid veterans with physical and mental injuries following service.

Following a thank you poem to veterans read by Hanna McKenzie, a Veterans Day prayer and a rendition of “God Bless America” from fifth grader Braylon Balandra the event came to a close.

Afterward, the veterans and service members lined the halls, while the students filled past, shaking their hands, giving high fives and thanking them for their service.

Prichard-Allen said she felt the event, for which she had driven three hours to attend, was “amazing.”

“It was such an honor,” she said. “It’s very emotional and moved me.”

For those who missed the event, the presentation was filmed and Clay plans to post the footage on the school’s website soon.