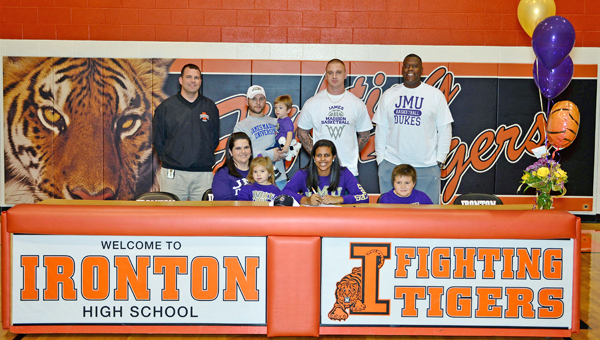 There were no agonizing, sleepless nights. There was no coin flip to determine the answer. This one was pretty easy.

“It really wasn’t that hard of a decision (to switch). After I went there again a second time I pretty much knew from the get go. I just couldn’t pass it up,” said Barrier.

“It’s the place I felt the most comfortable ever that I’ve been to. I love everything about them. I get along great with the coaches, great with the players there. I love the atmosphere of everything. They have a really good program. There’s just so much to there. I couldn’t ask for anything better.”

Barrier originally made a verbal commitment to Virginia Tech, but the entire coaching staff was changed with the exception of the head coach. Barrier said none of the coaches who recruited her remained and she was uncomfortable with the situation.

Barrier began her tour of schools once again and the final four were Pitt, Indiana, Missouri and JMU.

“I really feel great. I’ve really not been this excited in my lifetime before. I can’t wait to be there,” she said.

Barrier has more than 1,000 career points. The 5-foot-11 senior averaged a career-high 19.8 points a game last season as Ironton went 19-6 and reached the regional semifinals.

A first team Division III All-Ohio selection, she averaged 9.3 rebounds, 28 assists, 3.5 steals and 2.2 blocks a game. She shot 52 percent from the field and 38 percent from behind the 3-point line and shot a 67 percent clip from the foul line.

“She does everything for us. She shoots, she handles the ball, she rebounds, she plays defense, she plays inside and outside, she can do it all,” said Graham.

“For her I think it’s a great fit. She’s going to come in and play the two or the three. She was high on their list. She’ll do well there. She’s a hard worker. She loves the game. I’m excited to see what she does there.”

Barrier confirmed that JMU has plans for her to play the two or three position and that’s fine with her.

“I’ll probably be a two, I would say, maybe a two-three unless they would say something new to me that I don’t know about. Yeah, I feel comfortable playing that position,” said Barrier.

Signing with the Dukes fulfills Barrier’s dream of playing at a Division I school although she admits she wasn’t sure it would come to fruition.

“No, although it’s always been my dream to play D-1, I never thought I would get this far with it. It surprised me, but I’ve loved it,” said Barrier.

With her future secure, Barrier will now turn her full attention toward the upcoming season.

“The goal is to get to Columbus (state tournament) and keep a winning record. Everyone has high expectations for us, so hopefully we’ll live up to those.”

With her past success and a Division I scholarship in tow, Barrier knows that she will be an even bigger target for opposing defenses. But she knows there’s plenty of talent around her to keep teams honest.

“It’s going to be tough, but I’m ready for it. I’m excited and ready to go. My teammates are great. I love playing with them every day. They’re great,” said Barrier.

James Madison is coached by Kenny Brooks who is in his 14th season and has a 310-116 record, thus making him the winningest coach in JMU history.

The Lady Dukes were 29-4 last season, won their fourth Colonial Athletic Association championship and earned a berth in the NCAA tournament for the fifth time during his tenure.

Barrier plans to major in psychology.

“They have a good academic program,” said Barrier.