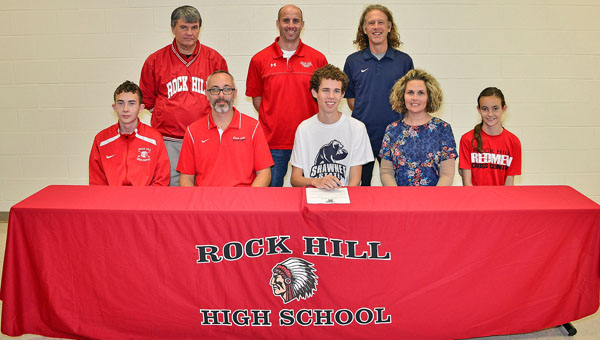 PEDRO — Seth Miller turned a $10 bet into a college career.

Miller has been running cross country since middle school and after signing a letter-of-intent with Shawnee State University, the Rock Hill Redmen senior standout will be running at the next level.

But all of his running started as 8-year-old thanks to winning a bet.

“In the second grade I was at soccer practice. We would race all the way around the soccer field about a half a mile. The coach bet us $10 that no one could beat him.,” said Miller as he recalled his first experience with running.

Now it’s a good bet the Miller will become an immediate factor in the Shawnee State Bears future success.

“We’re expecting him to be in the money for us — top five. I think he’s good enough to do that,” said Shawnee State coach Eric Putnam.

“He’s worked hard, trained hard, so I think the transition to five miles won’t be as tough for him as some kids and that’s what we’re excited about. He’s already been down here and run with out guys so I think it’s a good fit for him.”

“I prefer to run college races. In high school you run 5K. In college you run 8K. The longer the distance is, typically the more I excel,” he said.

Miller is a two-time Ohio Valley Conference individual champion and three-time state qualifier. He led the Redmen to the OVC team title this year.

Miller has qualified for the state cross country meet the past three years and his 16th place finish in the state meet this year was the highest by any runner to ever be part of the Rock Hill program.

Miller said there were a lot of factors that affected his decision.

“Shawnee was close and affordable and they had what I wanted academically,” said Miller.

“As far as NAIA goes, they’re one of the best in the nation typically. It just seemed like a good fit. I know their guys and I like their guys. I think I’ll do well running under coach Putnam.”

““He’s a hard worker. He’s the hardest working kid on our team. He’s 100 percent effort. You can’t ask any more of him than what he does. He does so much on his own and then he comes out and runs with the team. He’s dedicated to the sport,” said McFann who held the Rock Hill 3K record until it was broken by Miller.

Miller is virtually blind in one eye, but it has not been a determent.

“The only issue I’ve really had with it is when there is varying terrain. I’ve got pretty good judging my distance because I run trails all the time,” said Miller.

“The state meet is big and there are guys on both sides of you and I would go to cut over and run into them because I didn’t see them there. But I’ve figured it out. It’s not too bad in track.”

The bet here is Miller will run well for Shawnee State. Any takers?

CHAMPAIGN, Ill. (AP) — J.T. Barrett was back from his one-game suspension, and some of his best plays turned out... read more