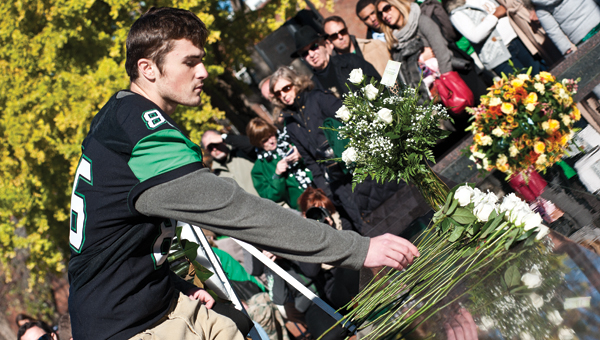 Marshall University students lay white roses along the edge of the school’s fountain, one rose each for of the 75 lives lost in a plane crash in 1970, during the annual memorial service on Saturday.

HUNTINGTON, W.Va. — Forty-five years have not dimmed the impact the Marshall University plane crash that almost destroyed the college’s football program has had on the community.

As a crowd gathered at the Memorial Fountain on MU’s campus on a sunny Saturday morning, the 75 who lost their lives in what has been called the deadliest sports-related tragedy in U.S. history were remembered for how their deaths transformed a city and a university.

Each year MU students organize a special memorial ceremony to honor them and officially silence the fountain dedicated to the tragedy until next spring.

“(The crash) ever reshaped the foundation of Marshall University,” Duncan Waugaman, student body president and one of the organizers, told the audience. “That night we made the transition from a school to a family.”

At approximately 7:30 p.m. Saturday, Nov. 14, 1970 a Southern Airways chartered plane coming into Tri-State Airport on a rainy, foggy night crashed into the side of a hill near Kenova, West Virginia. The plane carried all but two players on the football team, all the coaches, four doctors, two sports broadcasters and numerous Huntington businessmen and their wives.

Many children living in Huntington lost one or both parents that night.

“The way our community rallied, Marshall University has a unique story,” Waugaman said.

MU athletic director Mike Hamrick, who was 13 at the time of the crash, called the tragedy a story about perseverance as the university’s football program was almost discontinued.

“Those individuals gave Marshall University and this passionate community a story that no one else has,” Hamrick said. “It brought us a sense of togetherness. It has propelled this football program and this university. Nov. 14, 1970 was the day we became “We Are Marshall.”

Keynote speaker was Stephen Ward, whose father, Parker Ward Sr., was killed in the crash.

“So many we lost, brothers, sisters, sons, daughters,” Ward said. “Some lost both mom and dad. That fountain lives an eternal life. Every day is a gift. We are not guaranteed tomorrow.”

Hamrick and members of the Ceredo Fire Department, whose crew was first on the scene that night, laid a wreath at the fountain. Then all 75 names were read as either a family member or a member of the current football team placed a single white rose at the fountain’s edge.

Then the water dripping through the bronze sculpture created to symbolize life slowly stopped.

Following the singing of the university’s alma mater, the crowd joined in one last time in the cry: “We Are Marshall.”

Board of elections answers questions about mayor’s race

There have been questions and concerns exhibited about the upcoming mayoral runoff election, which the board has addressed as they... read more