Buckeyes must put some punch in offense 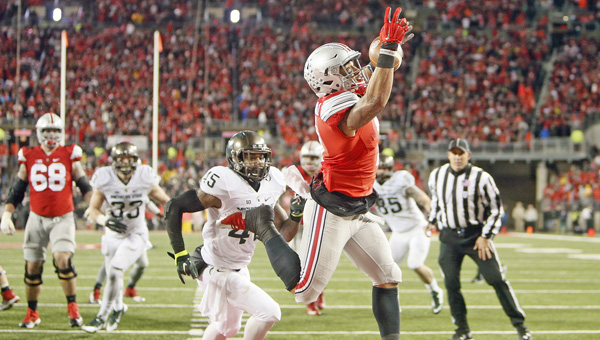 COLUMBUS (AP) — Fans in a chilly and wet Ohio Stadium on Saturday got to see a two-quarterback system work — not to perfection, but good enough to defeat a ranked opponent.

Unfortunately for Ohio State, that tandem of Tyler O’Connor and Damion Terry played for Michigan State, and the replacements for the injured Connor Cook led the Spartans to a 17-14 upset of the Buckeyes.

Ohio State, coming off its College Football Playoff championship, had an abundance of talent, especially at quarterback, where the two-headed monster of J.T. Barrett and Cardale Jones was going to crank out 50 points a game.

Instead, the Buckeyes were held to 132 total yards and five first downs. Their two touchdown drives totaled 38 yards and their scoring average dropped to 34.4, 36th in the nation.

Afterward, Heisman Trophy hopeful running back Ezekiel Elliott criticized the coaches for giving him the ball only twice in the second half and 12 times total for 33 yards.

The game was yet another step in a season-long attempt by the team to set its identity. Jones, the better deep-ball thrower, has started eight games. Barrett, more comfortable with the read-option, has started three of the past four — he was suspended against Minnesota after a receiving a citation for driving while impaired.

“I don’t know if there’s any one solution,” he said. “As a group we need to take ownership. Everyone that’s out there playing has to reflect on themselves and look at what they can do better to help the team.”

Left tackle Taylor Decker knows what the Buckeyes must do.

“Our downhill run game with tempo is something we’re good at, but it’s not something you can do all the time,” he said.

Michigan State did what a lot of times are trying against Ohio State, stack the box and force the Buckeyes to throw. With an experienced offensive line that has been subpar in pass blocking and no consistent deep threat, Ohio State can be throttled if Elliott doesn’t carry the load.

But he can’t do it alone.

Ohio State was outmuscled up front against the Spartans. After getting the ball on a turnover at the Michigan State 32 in the second quarter, the Buckeyes needed 10 plays to score, with Elliott going in from the 1 on the last of his eight carries on the drive.

He was a phantom after that. The combination of the elements and the stout Spartans defense was stifling, leaving Barrett as the team’s leader rusher with 44 yards on 15 rushes. Meanwhile, the Spartans duo of O’Connor and Terry totaled 16 runs for 50 yard and added a combined 91 yards through the air.

“(The Spartans) were keying on the best player on the field, Zeke Elliott,” Ohio State coach Urban Meyer said. “But hindsight, feed him. He has a way of making yards.”

Against Michigan, Ohio State will need to spread the field and get H-backs Jalin Marshall and Braxton Miller and wide receiver Mike Thomas more involved. The Wolverines (9-2, 6-1) feature a defense that is second nationally in total yards (263.1 per game) and sixth in scoring (14.9).

“I think you see a bunch of guys that are passionate about winning over there,” he said. “They’re going to get that squared away.”