Mayor Blankenship reflects on his tenure 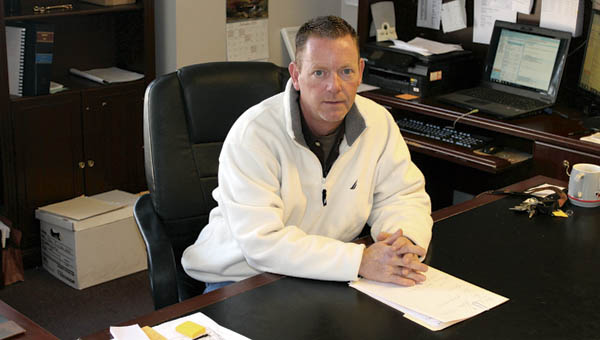 Ironton Mayor Rich Blankenship sits at his desk during his last week as mayor. Blankenship has served as the mayor of Ironton for eight years.

Serving as the mayor of Ironton since December of 2007, Rich Blankenship remembers all that he has accomplished in the past eight years. Taking the first steps to begin the new Ironton-Russell Bridge, fixing problems with the city’s storm drain after flooding in approximately 350 homes and the city assisting in the Gateway Project, the Holiday Inn and Big Boy are just a few things that happened during Blankenship’s tenure.

“When I first came in our city was a little stagnant. Attitudes and morale were down in the city,” Blankenship said. “I think during my eight years, I’ve seen a dramatic change in the city’s attitude for the better. It’s a positive attitude overall.”

His willingness to help anyone with an issue is something Blankenship said he is particularly proud of during his time as mayor.

Blankenship said the relationships he’s built as mayor have tremendously impacted the city of Ironton in a positive way.

“A lot of people forget about us below Chillicothe. They forget about Ironton,” Blankenship said. “The relationships I’ve built with state and federal officials brought attention to the city of Ironton and what we are trying to do to improve our city.”

Although Blankenship is happy about all he and his administration have been a part of, he admitted there’s always going to be things he wishes he could have gotten to that he didn’t, or doing things differently if given the chance for a second time.

“Hindsight is always 20/20. Some things I could have handled differently knowing what I know now,” he said. “Was I always correct? No, but sometimes you have to make decisions as quickly as possible and make an educated decision.”

Blankenship said updating zoning laws and outdated ordinances are two issues he wishes he could have gotten to.

“The current zoning laws really need updated. They’re very old and there’s new concepts today that weren’t an issue in years past. A lot of ordinances are also just outdated,” Blankenship said. “I would have liked to see more economic development, but I also realize that takes a long time to accomplish. Eight years goes by very fast.”

Even though Blankenship will no longer hold the Ironton mayor’s office beginning on Tuesday, he will still be a part of the city, as he was elected to the Ironton City Council on Nov. 4.

“Having knowledge of the city budget and knowledge of the daily operations of the city and the challenges that we still have ahead of us such as the funding the sewer separation project, which is a federally mandated project, the riverfront project that’s process has started and upgrades or a replacement on the floodwall system, will really be beneficial to council,” Blankenship said. “As a council member, I’ll have that inside knowledge to know where we’re at on these projects and the expenses of the city. I look forward to working with city council and continuing to move our city in a positive direction.”

As mayor, Blankenship wants to thank the city and his family.

“I appreciate all the support from the citizens of Ironton the past eight years,” he said. “Also, my family’s been a big support to me. They’ve withstood me being away from home quite a bit and I feel like I missed out on a lot of family time and my kids’ events, but they’ve been good about this whole thing. Hopefully they’ll realize the efforts I put in the city will benefit them and their generation.”

$2.3B in unclaimed funds available