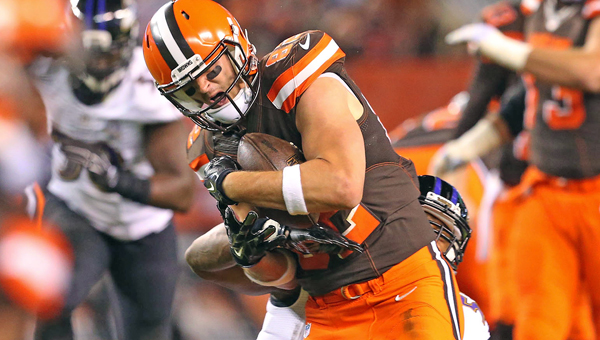 Cleveland Browns tight end Gary Barnidge is dragged down from behind by Baltimore Ravens linebacker Daryl Smith during the first quarter on Monday at FirstEnergy Stadium in Cleveland. (Phil Masturzo/Akron Beacon Journal/TNS)

CLEVELAND (AP) — Josh McCown dropped to the ground in excruciating pain. A worse sting was still to come for the Browns.

Travis Coons had his potential game-winning 51-yard field goal blocked and returned by Will Hill for a touchdown as time expired, sending Cleveland to a heartbreaking 33-27 loss on Monday night, when they also lost McCown to what could be a serious injury.

Coons’ attempt was deflected by defensive end Brent Urban, who was playing his first NFL game for the injury-riddled Ravens (4-7). Hill scooped it up and rumbled down the left sideline for an improbable win, stunning the Browns (2-9) and a Cleveland crowd while a national TV audience watched.

“Tough one to wrap your brain around,” Browns coach Mike Pettine said. “Frustrating. Our guys battled back, came back from some deficits but didn’t finish it. That’s the frustrating thing.”

It’s another one of those only-in-Cleveland moments for the Browns, who have dropped six straight games and seem to be heading toward another offseason of change.

McCown, who was only back in the lineup because Pettine had benched Johnny Manziel, injured his collarbone in the fourth quarter and was replaced by Austin Davis, whose 42-yard TD pass to Travis Benjamin tied it with 1:47 remaining.

McCown left FirstEnergy Stadium with his right arm in a sling. Pettine said he did not know the extent of McCown’s injury. The 36-year-old quarterback has battled through an assortment of injuries this season, but this one might be too severe to overcome.

Davis played well in his first game with the Browns, completing 7 of 10 passes for 77 yards.

The Browns appeared to be in position to pull out a comeback win — they trailed by 14 in the first half — when cornerback Tramon Williams intercepted Schaub with 50 seconds left at Baltimore’s 46.

But as Cleveland attempted to get closer for Coons, Davis wasted valuable time because of a communication issue with the sideline and the QB couldn’t get out of bounds after a scramble, forcing the Browns to call a timeout.

“Ideally, we wanted to get it closer and save the timeout for the field goal,” Pettine said. “That’s on us. We needed to handle that better. I credit Austin for coming in. He did a heck of a job on the touchdown drive. He made plays. I know he was a little shaky. It’s tough for anybody coming in and your first plays third-and-10. I thought once he got out there next time, settled in, he was solid.”

Pettine would not say if Davis would remain the starter if McCown is out. McCown finished 21 of 38 for 212 yards and a TD.

Cleveland linebacker Karlos Dansby picked off Schaub and returned it 52 yards for a TD in the third quarter to give the Browns a 20-17 lead, the first time they’ve been ahead in a game since the first half against Arizona on Nov. 1 — a span of more than 173 minutes.

But they weren’t up for long as Schaub countered with his second scoring pass, a 15-yarder to Kamar Aiken to put the Ravens ahead 24-20.

McCown took several hard shots in the second half and went to the sideline in agony. He returned to the field, but dropped to the ground after an incompletion, forcing the Browns to turn to Davis, who made eight starts for St. Louis last season but was getting his first action for Cleveland.

Manziel was benched by Pettine after the second-year quarterback broke a promise by going out and partying during Cleveland’s bye week. McCown had missed the past two games with injured ribs, and was expecting to be a backup for the final six games before a video of Manziel holding a champagne bottle and rapping vulgar lyrics surfaced while the team was off.

Now Manziel could be back in the lineup.

With Manziel out and both teams struggling this season, the game was a tough sell to a TV audience and thousands of Browns fans stayed home as well. A group of disgusted Clevelanders arrived wearing brown paper bags over their heads as another season unravels on the shores of Lake Erie.

Following the game, they may have wanted to throw up in them.

NOTES: TE Gary Barnidge had seven catches for 91 yards. … McCown passed for a franchise 457 yards against the Ravens earlier this season and finished with 669 in two games. … Dansby is the eighth player in team history with two TD returns in the same season. LB David Bowens did it in 2010.

Jim Walker jim.walker@irontontribune.com   RACELAND, Ky. — It might not have passed the so-called “eye test,” but Ironton Lady Fighting... read more