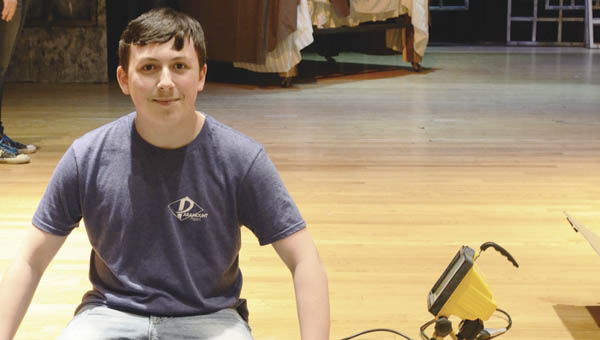 SOUTH POINT — “A Christmas Carol” is being performed by the Ashland Community and Technical College Theatre, and a South Point High School student has a role in the production.

Marshall Gibbs, a 10th grader at the school, is playing Peter Cratchit, the oldest son of Bob Cratchit, the beleaguered, underpaid clerk of Ebenezer Scrooge in the Charles Dickens classic.

Gibbs said he isn’t new to acting and has appeared in more than 20 productions, having started acting about five years ago.

He said he has starred in numerous plays with the Paramount Players in Ashland, but this is his first time in a show at ACTC.

“It’s been fun, but can be stressful at times,” said of his experience getting ready for the production.

Gibbs said though he has a lot of experience acting, it isn’t his ultimate career goal.

“I want to get into video production,” he said. “But I plan to minor in theater.”

The play, with a cast of 30 adults and students from the area, will run from Wednesday-Saturday at 7 p.m. and Sunday at 2:30 p.m. in the J.B. Sowards Theatre at the College Drive Campus.

Jim Maggard, director of the play, says it’s a traditional take on the Dickens tale, with an emphasis on heart.

“It really helps you find the child inside you,” he said.

Tickets are $10 for adults and $5 for students and seniors. They may be picked up in the ACTC bookstore or the door before each performance.

CHESAPEAKE — The Sybene/Chesapeake Senior Center is giving a hand back. Volunteers have collected more than 150 pairs of gloves... read more