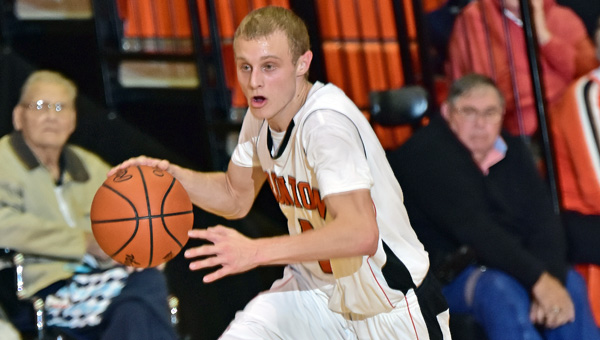 Ali vs. Frazier. Braddock vs. Baer. Holyfield vs. Bowe. Those are some of the greatest fights in boxing history.

There was another great fight Wednesday night as the Ironton Fighting Tigers hosted the Columbus Eastmoor Warriors in the season opener.

Eastmoor has a veteran team returning from a team that reached the Division III state tournament. Ironton had a team full of freshmen and other untested players.

Still, the fight was on and when the final horn sounded it was the Fighting Tigers’ gloves that were raised with a 37-32 win.

“We talked before the game to keep it simple. We had to be physical and we knew that physical wasn’t always going to be right. There were mistakes going to be made by being physical.”

Ironton fell behind 32-31 with 1:13 left on a putback by the Warriors’ Osaretinwen Onaiwu.

But Phillip Kratzenberg was fouled on a drive to the basket and made both free throws to put Ironton on top for good at 33-32 with 36 seconds to go.

Eastmoor missed the front end of a one-and-one and Kratzenberg took a charge that sent him to the line where he made two more foul shots with 13 seconds left.

Kratzenberg was fouled again with three seconds on the clock and made both shots to set the final score.

Kratzenberg praised LaFon’s zone defense strategy and his teammates effort for the win.

“It’s all coach. It was a good overall game for us and I’m glad we got the ‘W’,” said Kratzenberg.

“It was really fun. I loved it. They were up in us a little bit. It was hard competition. I was ready to shoot (the free throws). I was confident I could make them to be honest.”

Kratzenberg led Ironton with 12 points. Freshman Ethan Wilson had 11 points and five rebounds and freshman Charlie Large had 9 points including 5 clutch points in the fourth quarter.

“We talked about being composed. I know we won’t do everything right. I knew we were going to have freshmen and new guys out there. We have young kids and inexperienced kids,” said LaFon.

“I like our locker room. Those kids want to be good and they want to be coached hard. They really do. They got coached hard tonight and they kept playing. I got into some freshmen and they could have crumbled. Sometimes they even stepped up even more.”

Ironton’s 2-3 zone helped limit Eastmoor’s inside game and forced the Warriors to shoot from the perimeter. They were just 14-of-50 from the floor and failed to make any of their 15 3-point attempts.

The Warriors were also a dismal 4-of-10 at the foul line. Ironton converted 10-of-12 from the line including 9-of-9 in the fourth quarter.

“We talked about we had to make free throws because that might be the only way we get a chance to score. That was a fourth of our points and that doesn’t happen a lot,” said LaFon.

Wilson drained a trifeta that got Ironton within 6-5 at the end of the first quarter.

The Fighting Tigers took their first lead on a layup by Tyler Webb with 3:07 left in the first half to make it 13-12.

Down 14-13, Ironton scored six straight points over the final 2:25 as Large hit Wilson with a pass for a layup and then made two layups himself and it was 19-14.

Ironton struggled offensively in the third quarter with only three points but kept the lead at 22-20 to set up the thrilling finish..