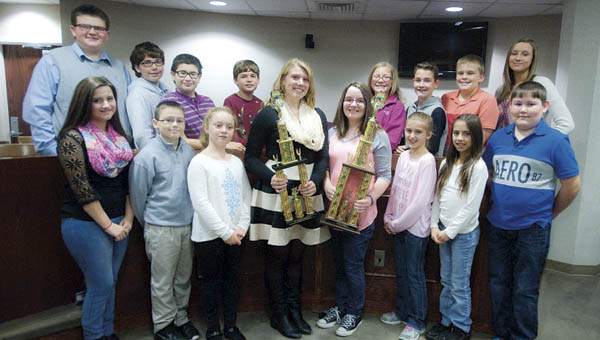 Two familiar faces faced off and took the top two spots in the county spelling bee in Ironton on Wednesday.

“It feels good,” Neal said of her victory in the eventat the Ironton City Center.

Neal’s vocabulary expertise was made clear during the competition, when, at one point, she correctly guessed a word’s language of origin when asking the judges.

The 16 school winners, ranging from fourth to eighth grades, took turns spelling words such as “vigilante,” “vulcanize,” “worrywart,” which were read by Doug Korstanje, the director of marketing and community relations for St. Mary’s Medical Center. A former reporter with WSAZ and graduate of Chesapeake High, he has served as the bee’s pronouncer for three years.

The climatic moment came when Leep misspelled “dossier.” She had asked for and was granted the word used in a sentence, as well as its language of origin, which the judges were unable to provide.

Following this, Neal correctly spelled “periphery,” then, needing to spell one more word correctly in order to be declared the champion spelled, “macramé.”

Leep, who serves on Fairland’s student council, won the county bee last year, and qualified for the regional bee at Ohio University in Athens, where she placed second.

Following victory at the county level, winners have to pass an online test in order to compete in the regional bee in March. Neal placed second in the 2014 regional event and third in 2013.

The competition ends with the Scripps National Spelling Bee, on Memorial Day weekend in Washington, D.C.

As eighth graders, Neal and Leep were in their last year of eligibility to compete in the annual event, which is open to students up to their grade level or the age of 15.

James Payne, the superintendent for Lawrence County Educational Service Center, spoke of the value of the bee, which is aimed to promote language and vocabulary.

“It shows there might be a little bit more to education than state testing,” he said, citing events such as the science fair and quiz bowl.

Gateway Centre in next stage

Hearing on grants set for Monday Advancing the Gateway Centre to the next level starts with pouring more concrete and... read more