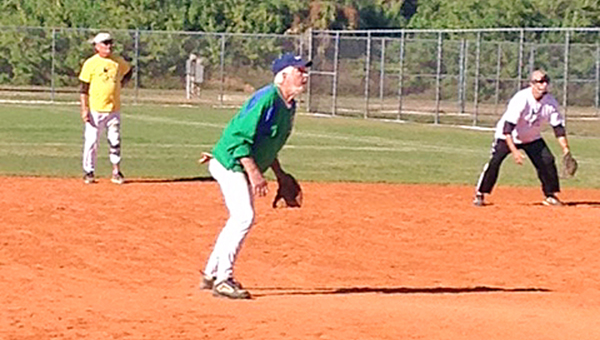 Ironton’s Herm Zornes, 82 years old, gets ready to field after making a pitch in a senior’s softball game. Zornes has been nominated for the National Seniors Softball Hall of Fame. (Photo Submitted)

The late NFL quarterback and placekicker George Blanda played until he was 48.

NHL Hall of Famer Gordie Howe played until he was 52.

And then there’s Herm Zornes. How long does he want to play? That’s anybody’s guess considering he’s still playing at the tender young age of 82.

The Ironton native was recently nominated for the National Seniors Softball Hall of Fame, a sport he still plays during the winter and spring months in Florida.

“In the summertime I play softball twice a week and I cut grass three times a week so I get a lot of walking in,” said Zornes who worked at the Ironton Solvay/Coke plant for 30 years before retiring from a job at Tri-State Industries.

“I’ve not been injured. I’ve been blessed with good health and that’s what keeps me going. I just don’t like to sit around on the couch. I like to be outside and working and doing things like that. When I go to Florida, I ride the bicycle and walk and play softball and enjoy the weather. I go to the beach occasionally.”

Zornes has won seven rings and numerous watches and bags for his playing exploits including the league’s Most Valuable Player several times.

“The thing about my games is defense. I love defense. It’s hard to get elected into the Hall of Fame just as a defensive ballplayer. They like the guys hitting .750 and .800, the big strong guys. I don’t’ expect to get in and that doesn’t matter. I love playing,” Zornes said.

Son Jay Zornes — an Ironton businessman — said the family enjoys watching him play softball but they still have moments when they hold their collective breaths.

“We went and watched him play and you’re scared to death he’s going to get hit. But then you see he still has great reflexes. Nothing gets by him. He’s an extra infielder. When he lets go of the pitch, he backs up and no one gets the ball by him,” said Jay.

The description isn’t just bias from a proud son. Those sentiments were echoed by the late Lee Joe Nani, one of the all-time great men’s slowpitch softball players.

“I played with one of the best players in the country. (Nani) said you’re the only pitcher I’ve ever seen that wanted all 21 (batters) to hit the ball back through the middle,” said Zornes with a grin.

And Zornes had plenty of praise for Nani who died last year.

“He’s the best shortstop I ever played with. He was a great player. He coached baseball in Indiana for 30 years. He would always say, ‘stay down, stay down on the ground ball.’ That’s always something I would remember. The fundamentals of the game are what I like. I enjoy it,” he said.

Zornes likes to spend his “free time” shooting basketball and teaching his granddaughter Lilly Zornes — a seventh grade student at the Ironton Middle School — a few things about the game.

“She’s fast and really quick. When you tell her something, she listens and tries to do it,” said Zornes.

“I just enjoy trying to help kids do things, showing them the fundamentals,” said Zornes.

During the family gathering for Thanksgiving, everyone met at the home of Zornes’ son-in-law Jim Hacker, owner of Iron City Hardware.

Hacker not only has a large collection of high school football helmets in his store, but he has other sports memorabilia purchases including the old goalposts from Tanks Memorial Stadium.

The goalposts are in Hacker’s backyard and he talked Zornes into attempting some field goals after the Thanksgiving meal.

“Hack said, ‘Let’s go out and kick some.’ I kicked three or four and then finally got one over the bar. I kicked a few more and that was enough,” said Zornes.

A graduate of Ironton High School where he played football and baseball as well as industrial league basketball, Zornes often played in two summer leagues at the same time well into his adult years.

“I just keep active. I look forward to each day as a new day,” said Zornes.

Sounds like he’s got another 10 years left in him. Hear that, Brady?

COLUMBUS (AP) — No one from Ohio State was doing cartwheels after snapping a four-game losing streak with an 89-62... read more