Gilpin reflects on tenure as mayor 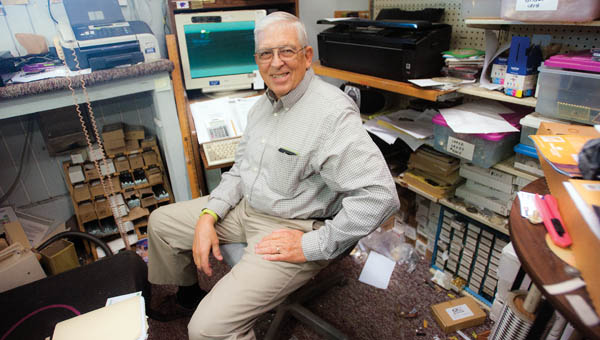 Longtime Mayor Dick Gilpin, sits inside his business, Gilpin’s Creative Trophies, as he reminisces over his terms as village mayor.

CHESAPEAKE — Chesapeake Mayor Dick Gilpin said the time is right to step down after serving two terms as the village’s mayor.

“I don’t have the energy I had when I started,” he said. “And I wanted to leave on my own terms, instead of one day getting voted out.”

He compares the learning experience on the job to the difference in perspective from raising children vs. raising teenagers.

“When you first get in office, you have all kinds of lofty goals. Then, reality hits, and you go into survival mode,” he said, noting the challenges of the job.

He said funding is one of the biggest obstacles any mayor faces.

“The decrease in the amount coming from the state, combined with a reduced tax base, makes it difficult to acquire adequate funding,” he said.

Gilpin, who was originally from Michigan, lived in Columbus and Madison, West Virginia, before moving to Lawrence County, where he opened his business, Gilpin’s Creative Trophies, in Chesapeake.

He said his work and being actively involved in the neighborhood led to his time in politics.

“I’ve always been community-oriented and serve in several community organizations,” he said.

He was appointed to fill an unexpired village council seat in November 2006. In 2007, he ran and won election to the position of mayor, taking office in January 2008.

While Gilpin said there is no single outstanding accomplishment he is most proud of, a series of smaller victories makes for a good record, particularly in the area of infrastructure.

“We’ve been able to get the streets paved and secure grants for slip repair,” he said.

Some projects have required work with the state of Ohio.

“We were able to upgrade and maintain drainage systems on Rockwood, which has been needed for a long time,” he said.

Gilpin said he has no further political aspirations after leaving office at the end of December, but will remain active in the community.

“It’s like the oath you take in the military to support and defend the Constitution,” he said. “Once you leave, it doesn’t end.”

He said the village’s next mayor, Tommy Templeton, who serves on council, will face the same challenges in funding infrastructure, but he is optimistic.

“I think he’s up to the job and will make a good mayor,” he said.

Winter coats for the taking in Ironton

Lisa Smith, with the First Baptist Church, prepares to hang coats to the poles located at the Ironton Farmers Market... read more