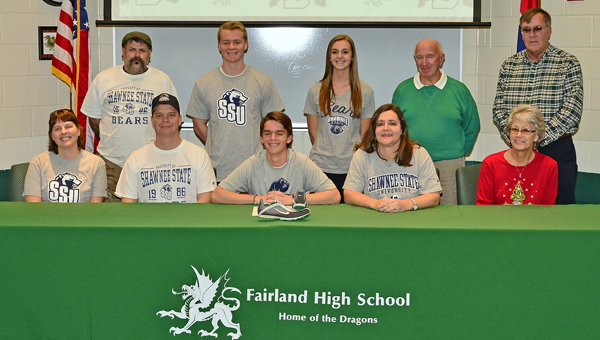 A challenge introduced him to cross county, an injury challenged him to work toward recovery, and now he faces a new challenge of running at the college level.

The Fairland Dragons’ senior has met his challenges in the past and set his sights on a new one when he signed with the Shawnee State Bears on Thursday.

Fairland coach Chuck Wentz is confident Flynn can answer the challenge with the Bears.

“I can see him fit in right there,” said Wentz.

The first challenge for Flynn came in the 7th grade when a friend — Chad McComas — told him to come out for practice on Friday.

“The coach said if I could run two miles without stopping they’d take me to the meet (on Saturday). So that’s what I did and ever since I’ve been running,” said Flynn.

Although Flynn made the two miles, he admits there was some apprehension.

“I didn’t think I could do it at first because it seemed like a long way, but it wasn’t very fast so we just kind of went out and a couple of my teammates were with me and they just got me through it. I went out the next day and ran pretty well,” said Flynn.

The next challenge came in high school. After a good freshman year, Flynn injured his foot and struggled to recover for nearly two years.

“He really came back his senior year and really dedicated himself and came back from his injury quite well. He still hasn’t reached his potential,” said Wentz.

But Flynn wasn’t selfish with his work and dedication.

Wentz said he pushed his teammates to meet the challenges that faced them in cross country.

“Conner is a leader. He’s one of the best leaders I’ve ever had and I’ve been coaching for a while. He really led the cross country team,” said Wentz.

“He made the phone calls. He brought the kids together and took kids on runs. He slowed his pace down just so he could train them. You couldn’t ask any more of that. He’s very good academically and athletically. He gets stronger as he goes.”

Flynn picked Shawnee State over other schools such as Rio Grande, Mount Union and Franklin Pierce because of the athletic training program, but also because of his connection with the athletic program.

McComas and former Fairland runners Logan Rowe and James Stewart are on the men’s team while ex-Lady Dragons Jessica Price, Megan Ashton and Emmy Fulks run for the women’s team.

“I kind of knew Shawnee was where I wanted to go. I’ve known coach (Eric) Putnam for a long time and I like being familiar with the surroundings,” Flynn said.

“I’m excited for it because I have former teammates who go there and I know Seth Miller from Rock Hill (who signed with Shawnee State) and it looks like a promising future.”

And a promising challenge. Just what Conner Flynn likes.