Joy of the season 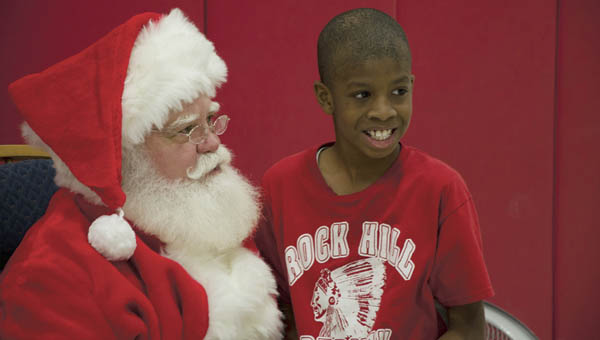 Students in the Lawrence County multi-category unit at Rock Hill were treated to a Christmas party by the Ironton Elks Lodge 127 and a visit from Santa Claus.

Students in the Lawrence County multi-category unit at Rock Hill Elementary were treated to a Christmas party on Thursday.

The annual event, organized by Ironton Elks Lodge 127, has been a long-running tradition.

“Every year, the Elks come in to volunteer and buy a present for every one of our kids,” Candace Wagner, a teacher at the school, said.

She said the annual event is a favorite of the children.

“Kids completely look forward to this for months,” she said. “They’re always asking when it’s going to be.”

Santa took center stage at the event, and, one by one, the children’s names were called out to visit with him.

After having a photo taken on his lap and a chat, they were given a bag by Jack Adams, the secretary of the Elks, containing Christmas gifts.

After the gifts were handed out, pizza was served to the children and their teachers, courtesy of Giovanni’s.

Fred Jones, a member of the Elks, spoke of the joy of taking part in the Christmas party.

“We walk away getting more out of it than the kids,” he said. “This is what Christmas is all about.”

About 70 children attended the party.