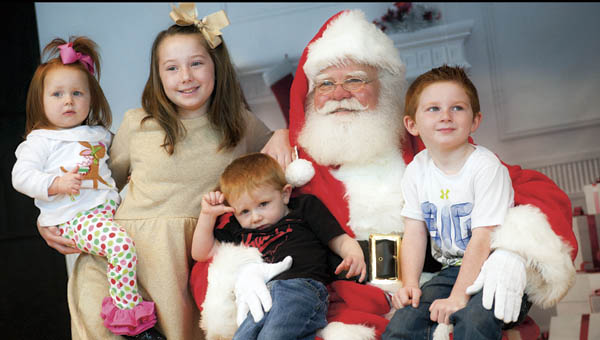 Rowe family children, pictured left to right, are Maizleigh, Kayleigh, Wyler and Tucker, sit on Santa’s lap at the Breakfast with Santa on Saturday.

Santa Claus, pancakes and Christmas tunes had the Dawson-Bryant High School cafeteria filled Saturday morning for the annual Breakfast with Santa, hosted by the Coal Grove Lions and Betterment clubs.

“We serve well over 1,500 people,” president of Coal Grove Lions Club Tom Carey said. “Everything is free, saying thanks to the community for their support. Everything we make goes back to the community; every penny.”

Children from Deering Elementary School put on a Christmas performance, singing various Christmas carols, led by music director Gwen Smith, and each child who visited Santa Claus on the stage received a treat bag. Garry Boothe, from Magic and Balloons 4-U, out of Wayne, West Virginia, was also on hand, twisting up a variety of balloons for the children.

This year marked the 15th year of the breakfast, although the Coal Grove Betterment Club has only been apart of the event for the last 12.

Carey said the Lions Club handles the breakfast and taking pictures of the children with Santa Claus while the Betterment Club makes treat bags as well as bring in Boothe for balloons.

“All of the Betterment Club members each bring 250 pieces of candy for treats, and we’ve gotten the balloon guy to come for the past 10 years,” Vickie McDaniel, president of the Coal Grove Betterment Club, said. “It’s a pretty day and we’ve been busy, but that’s what we want.”

Also helping out at the breakfast were members of Coal Grove Boy Scout Troop 103 and the Lions Club Leos, a Lions Club branch for children in high school and middle school.

“I want to thank the Coal Grove Lions Club and Coal Grove Betterment Club for sponsoring this event and the community for coming out,” Coal Grove Mayor Larry McDaniel, said. “There’s always a really good turnout.”

The Coal Grove Lions Club also hosts an annual pancake breakfast fundraiser the Saturday before Easter, has a golf scramble every spring and provides complete Thanksgiving and Christmas dinners for the needy.