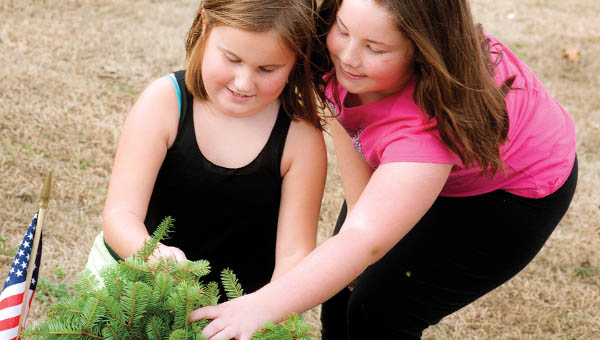 Dozens turned out to Woodland Cemetery on an unseasonably warm December day this past Saturday for the annual Wreaths Across America, a national event to honor those who served in the military by placing wreathes on their graves.

The event was brought to Ironton and organized at the Woodland Cemetery three years ago by Juanita Southers and Linda Dalton after having the opportunity to take part at Arlington National Cemetery.

The ceremony began with opening remarks by Linda Dalton’s husband, Leon Dalton welcoming everyone to the ceremony and giving some of the events background.

“Wreaths Across America was born in 1992 out of a desire to remember and honor American service members for their contributions in preserving our freedom,” Leon Dalton said. “Morrill Worchester and the Worchester Wreath Company, of Harrington, Maine, had the vision for this project and placed the first wreaths. It has since become an annual tradition to lay wreaths at the gravemarkers of our fallen veterans during December as a way to express our appreciation and pay tribute for the sacrifices made for our country by our service men and women.”

Dalton added that Wreaths Across America has no political or religious agenda, but rather its only mission is to remember and honor veterans during the holidays.

A moment of silence, prayer and the singing of the national anthem while members of two Ohio Army National Guard units raised the flag continued the service before guest speaker, retired U.S. Coast Guard Captain Joseph McKee, 94, spoke about his time serving and the importance of remembering and honoring our country’s service men and women. Tyler Payne, of South Point and member of Boy Scout Troop 115 and Sea Scout Ship 733, played the trumpet at the service as well.

Seven wreaths were then placed to honor the U.S. Army, Marine Corps., Navy, Air Force, Coast Guard, Merchant Marines, and POW/MIA before those in attendance placed the live evergreen wreaths on each grave in Soldier’s Plot.

“This cemetery is so beautiful in the summer, but lays desolate in the winter,” Southers said. “These wreaths make it beautiful during the holidays.”

Fresh evergreen is used because it is a century-long symbol to recognize honor, as Dalton stressed Wreaths Across America is not simply just decorating the graves, but honoring those who served. Using plastic wreaths that are just placed in storage every year is what is wanted to be avoided, Dalton said.

Southers said the wreaths are still purchased from Worchester Wreath Company in a program that involves the company donating a free wreath for every two bought. This year there were 558 wreaths in total.

The event takes place annually on the second Saturday of December.

Ironton Police, school team up to help others

ASHLAND, Ky. — Thanks to some generous donations and the help of many volunteers, about 25 Ironton Middle schoolers got... read more