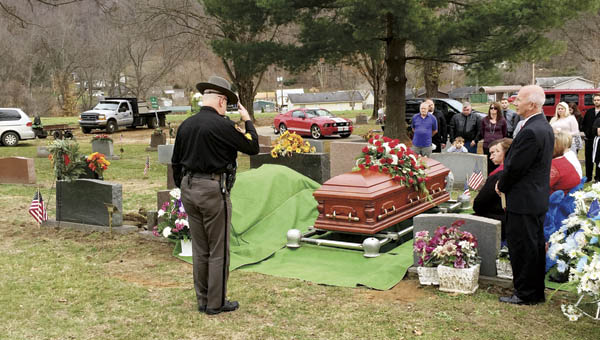 SOUTH POINT — One by one, law enforcement officers approached the casket of James Akers on Sunday, pausing for a moment to pay their respects and give a final salute to their friend and colleague.

Many wiped tears from their eyes as they walked away, lining up outside Slack and Wallace Funeral Home to stand at attention for the Akers family before the veteran officer was taken to his final resting place at Calvary Cemetery.

Akers died Thursday at the age of 56 following an extended illness. He was a former police officer with the Chesapeake, Coal Grove and Proctorville departments. He retired as a detective from the Ironton Police Department after 20 years with the department. He also served on the Lawrence County Drug and Major Crimes Task Force.

It was clear Sunday that Akers made a strong and lasting impression on his fellow officers as someone who could be counted on, someone who was tough and someone who loved his family.

Jim Carey, former Ironton police chief, officiated at the service at the funeral home and spoke of his time as a road officer, and later a detective, with Akers.

“He was one of the greatest men I’ve ever had the privilege of knowing,” Carey said.

Carey said he and Akers would often joke about how frequently the two men had to work together and that their wives would someday get the wrong impression of their relationship, which sent a wave of laughter through the crowd of family members, friends and officers.

He also said he was a dependable officer.

“If you needed someone to back you up, you could depend on him,” Carey said.

That was a sentiment felt by many other officers, who spoke highly of Akers and remembered him as a tough officer.

Following the service, retired Lawrence County Sheriff’s deputy Quincy Milem recalled responding to a call of an officer in trouble when Akers worked in Proctorville. Two suspects had jumped the officer. When Milem arrived, he said Akers’ tie was ripped and his badge was torn off.

“Jimmy already had the two guys contained,” Milem laughed. “He was an exceptional officer.”

During the service, Carey also spoke about knowing Akers as a devoted family man.

“A wife has lost her best friend, her soul mate, the love of her life,” Carey said. “Daughters lost their protector. I’ve never seen one man as protective over four girls in my whole life. … A son lost his hero. …. And some of us have lost our buddy.”

Carey also compared Akers to Job, the biblical figure who was put through many trials by God.

“He (Job) eventually received so much better,” Carey said. “And now Jimmy is receiving so much better. … He is with Christ, which is far better. There is no more death, no more sorrow, no more pain.”