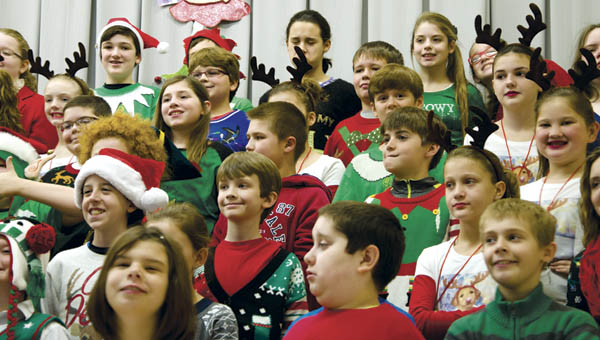 ROME TOWNSHIP — After two months of practice, Fairland West students were ready for the big show on Tuesday.

About 140 fifth graders from classes at the school were doing last minute rehearsals on Tuesday with music teacher Susan Dunfee, in preparation for two performances later in the day.

The production of “Crazy Carols” would first be seen by the student body in the afternoon, followed by a show for parents and the community in the evening.

Sandy Joseph, the school’s assistant principal, said the fifth graders had been preparing since October, first in music classes, then full rehearsals over the past two weeks.

The show features a number of songs, costumes and dance numbers.

One song featured rapping elves and Santa, while another, “The Reindeer Twist,” was led by several girls from the class. Joseph said students rehearsed the number with school nurse Melissa Buchanan, who used to teach ballet locally.

The choreography for the song was by her daughter Mackenzie Buchanan, a seventh grade student at Fairland Middle School.

Mackenzie has studied ballet for years and takes part in cheerleading and dance at her school, Joseph said.

“It was a new number for us and we’re benefiting from her talent,” she said.

Joseph said the production was a community effort, with decorations such as gift bags and boxes donated from students’ families.

“We’re fortunate to have parents to volunteer,” she said.

The school was decked out for Christmas, with a tree in the lobby featuring painted ceramic decorations made students.

Joseph said there were extra ornaments from the school’s tree entered into the Festival of Trees at Ohio University Southern’s Proctorville center.

All of the trees entered into the festival, organized by the Lawrence County Chamber of Commerce, were sold in a silent auction, with proceeds going to a scholarship fund.

Capitalizing on our anxiety

Bullies love fear. And once they sniff its smoke, the real pros know how to fuel and exploit it. They... read more