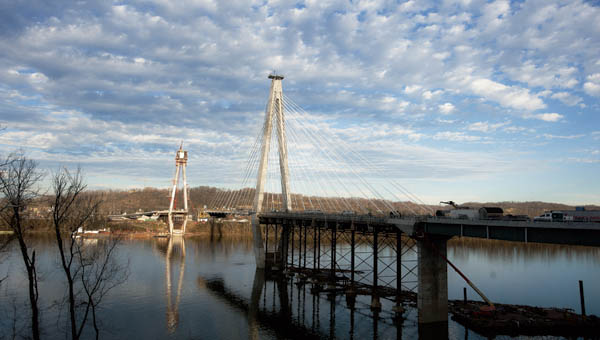 The new Ironton-Russell Bridge, from the Kentucky side, showing the first set of installed cables.

On paper, public information officer of the Ohio Department of Transportation (ODOT) District 9 Kathleen Fuller said it looked like construction of the Ironton-Russell Bridge wouldn’t be completed until early 2017. However, she added that ODOT is still optimistic for a 2016 completion date about a year from now.

“As of now we’re about 75 percent complete when you look at the timeline,” Fuller said.

Construction on the bridge began in the spring of 2012 and already 235 workdays were lost due to weather related issues. Currently, the Kentucky tower is finished with the bridge structure that stretches out from that side started. Fuller said the Ohio tower is nearing its completion.

“The Ohio tower should be done by the end of this month,” Fuller said. “That’s huge, so next year they can start constructing out from the Ohio tower to the Kentucky side.”

Cabling on the bridge has been started as well.

“It’s really now starting to take shape as a bridge,” Fuller said. “When you think about all the components that make it up.”

Aside from a few anticipated minor construction changes that won’t be visible to the public, Fuller said the project is still on track to be close to the $81.7 million budget.

4 Dems to fight for chance to meet The son of an Ironton judge, who recently was named to the... read more