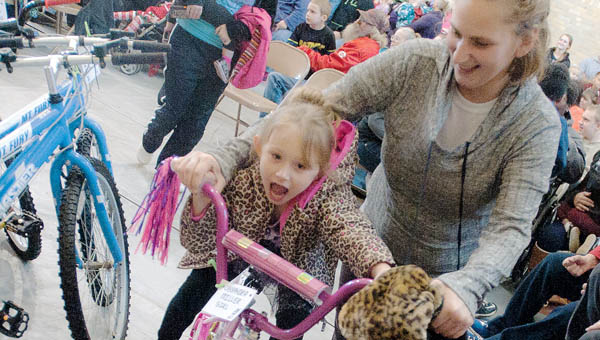 Cassandra Miller is happy as can be as she wheels away with her new bike.

Smiles lit up children’s faces and joy permeated throughout the St. Joseph High School auditorium Saturday afternoon as more than 200 bicycles were given away at the annual Christmas bicycle giveaway, where even Santa and Mrs. Claus paid a visit.

Organized five years ago by John Dickess, owner of Dickess Auto Repair, and Don Schwartz, general manager of the Ironton Advance Auto Parts, the goal of the giveaway is to provide children of Lawrence County who may not otherwise have a Christmas with bicycles.

“We had about 220 bikes that we gave away,” Dickess said. “But as more donations come in, we’ll still be giving away bikes until Christmas day.”

A list of names of children receiving bikes were read off one by one as each child went up to the stage to receive their gift. In the months leading up to the event, Dickess and Schwartz contact Lawrence County schools and Head Start programs to figure out who will take part.

Besides the bikes, the children and their families enjoyed pizza, donated by the Coal Grove Giovanni’s, Ironton Pizza Hut and Papa Johns in Flatwoods, Kentucky, three televisions, donated by Rent-A-Center, Wal-Mart and Rent-2-Own were raffled off and $500 worth of food gift cards, $120 worth of Wal-Mart gift cards and coupons for free Pizza Hut pizzas were also given away.

Dickess said donations by local businesses, groups and residents make the event possible each year, in that all of the bikes and giveaways were donated or purchased with donated money.

“Without the donations that we get, we wouldn’t be able to do any of this,” Dickess said. “We want to thank all of the donors for letting us do this.”

Last year the pair gave away their thousandth bicycle, and in the five years of the event, about 1,600 bikes have been given away, Dickess said.

Levies slated on the primary ballot in March

Voters in Lawrence County will decide on property tax levies in the spring. In Chesapeake, voters will vote for a... read more