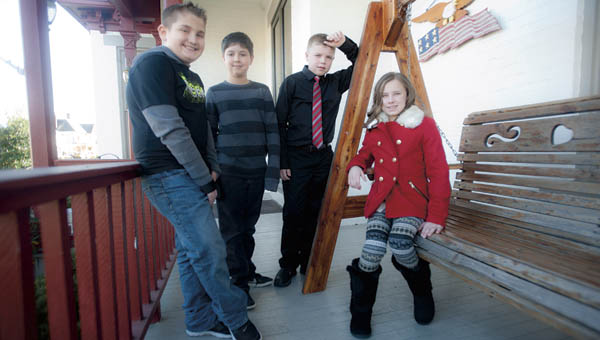 Fourth graders throughout Lawrence County who took part in the recent Lawrence County Historical Society essay contest not only improved their writing skills, but also learned about history of the county that interested them.

On Saturday, the first, second and third place winners, out of a total of about 80-100 entries, were recognized at the museum in front of family and friends.

Aydan Taylor, from Symmes Valley Elementary School, won first place and $50 for his essay on “Early Living in Lawrence County,” about the history of his sixth great-grandfather Joseph Miller and Joseph’s son and Taylor’s fifth great-grandfather, James Miller.

“I told my teacher about Joseph and James Miller and she said that would be excellent to write about,” Taylor said. “I feel great that I won.”

Second place ended in a tie between Dawson-Bryant Elementary School students Laura Hamm and Merrick Loevenguth, who each received $25. Hamm wrote about the Waterloo Wonders basketball team and Loevenguth wrote about Nannie Kelly Wright, one of the most famous people who lived in Ironton in Lawrence County and one of the wealthiest people of her time.

“I really like basketball and wanted to write about that,” Hamm said. “It feels good to win in this contest.”

Loevenguth also said he was pleased about where he finished.

Noah Patterson, from South Point Elementary, received third place and $10 for his essay on the Ironton Tanks football team.

Patterson said he enjoyed writing about the Tanks because he really likes football.

The essay contest is in conjunction with the museum’s Historical Cemetery Walk at Woodland Cemetery that takes place each fall.

“They can write about anything or anyone of historical significance to Lawrence County, Kay Rader, of the historical society, said. “We encourage them to attend the cemetery walk to get ideas.”

Rader said the winners are judged on accuracy, neatness, spelling and content, and each essay is between one and two pages in length.

Boggs wants data on revenue stream For the first time in a decade the Lawrence County Commission has approved a... read more