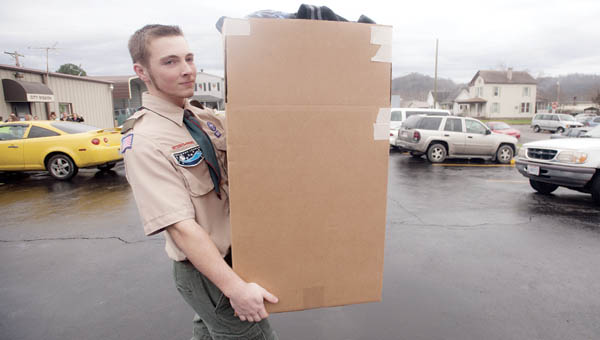 Annual giveaway has been going on for more than 60 years

“It’s going smoothly,” mission director Jeff Cremeans said. By mid morning the mission served about 250 so far of those registered.

“We’re about halfway through.”

More than 540 had registered with the mission to receive a box of food, which included vegetables, canned meat, milk, bread, turkey and canned fruit.

In addition, more than 700 toys were given out.

The city’s newly-elected mayor, Katrina Keith, was on hand, helping with the work.

“She’s been handing out food this morning,” Cremeans said.

Cremeans said the food came from donations, as well as some items purchased last week by the mission.

Six members of Boy Scout Troop 106 were among the volunteers, working along with Wyatt Boggs, who donated more than 500 toys to the mission last week.

“You don’t really know how many people appreciate this,” Corey Rollins, of the Scouts, said. “The opportunity is really an eye-opener, and makes you realize how lucky you are. It’s a blessing.”

The Rev. A.J. Stack, of Christ Episcopal Church in Ironton, spoke of the value of the effort.

“I think, in the Christmas season, the message is about reaching out beyond ourselves. We’re one human family,” he said. “This is the embodiment of that.”

Cremeans said the Christmas giveaway at the mission has been going on for more than 60 years.