On a special quest: Virginia woman searching for Christmas memory 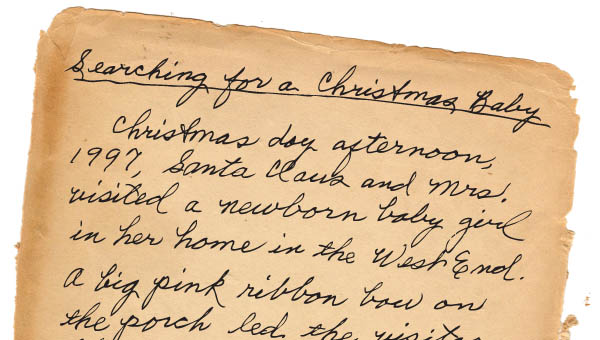 Twas the day of Christmas and all through the town

Not many were stirring, but all were around.

Presents had been unwrapped and put away with care.

Now remembering dear Santa had already been there.

But wait. Look down the street. Here’s the jolly old man with a laugh

And look again there’s his better half.

Stuffed in their bag were more presents to give out.

And that’s what they did until they were almost without.

Three gifts were left and the pair saw a sign

A bright pink bow dancing in the wind near the pine.

Inside they found the answer for them.

A 2-day-old baby girl, asleep in her new pram.

Nearby were sleeping big brother and toddler sister too.

So they knew now what they could do.

Reaching in their bag they brought out the toys

To give to the children for their Christmas joy. 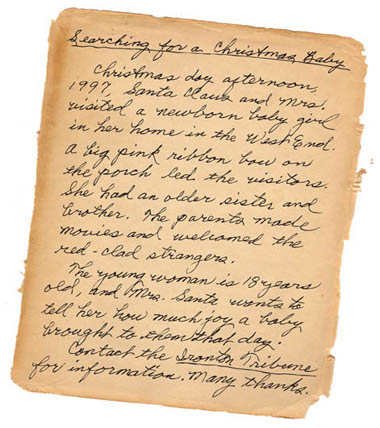 It was 18 years ago when Dean and Helen Hufford drove up on Christmas Day from Pulaski, Virginia, to visit their daughter and son-in-law Jane and Glen Herman, then pastor of First Methodist Church of Ironton.

Starting in the late 1970s, each holiday season the couple would dress up in Santa and Mrs. Claus costumes to distribute gifts to children in hospitals.

“We had everything we needed ourselves, so we did Christmas for children, wherever we could find a child, ” Helen Hufford said this week in a phone interview from her Virginia home.

Driving up from the commonwealth that day, the couple asked their son-in-law if there were any children in Lawrence County General Hospital to visit.

He said no but there were a lot of others who could use a visit from the Clauses. So off Jane went driving her parents in their red outfits around town. Twenty-six presents were given out until they saw a home in the west end of Ironton with the pink bow signaling a new baby girl had just been brought home.

“I have always thought how that paralleled the story in the Bible,” Helen said. “We were led by a pink bow. We had come from afar from the East. We came bearing gifts and left three gifts.”

Many years after that Christmas, Helen, now a widow, would think about whatever happened with that baby girl.

“I wonder how she grew up,” Helen said. “That Santa Claus came the day she had gotten home and had her first Christmas. That sweet mother was so trusting. They took pictures and pictures. We had the grandest time.”

This holiday Helen decided she wanted to see if she could find out about the girl, who turned 18 years old a couple days before this Christmas Day.

“If I am ever going to find that child, I had better this Christmas,” said Helen, who marked her 90th birthday this past Easter.

That’s why Helen wrote to The Tribune earlier this month asking if her letter to the editor could be published, simply so she could find the young woman whose first days on earth had given the couple so much joy.

“There is nothing as precious as your memories,” she said. “That little girl and our visit to her ranks way up at the top of my Christmas memories.”

In the corner of the back garage of the Harvest for the Hungry food pantry, stood a green and gold... read more