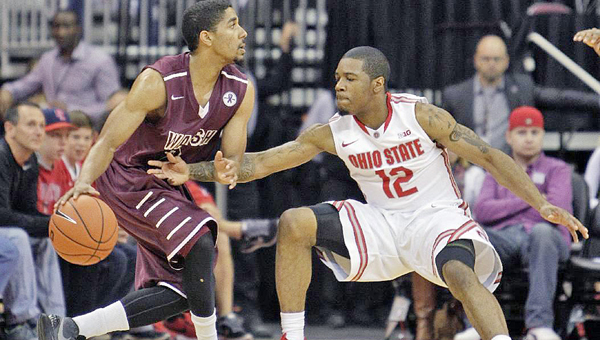 Describing the status of himself and teammate Zac Carter, Fletcher said, “We’re doing pretty well for ourselves.”

The Walsh University Cavaliers’ junior basketball players don’t need words to state the obvious. All it takes is a look at the number.

The Cavaliers are 5-3 on the season and 3-1 in the Great Lakes Intercollegiate Athletic Conference.

Carter was just named the conference Player of the Week in the South Division.

Carter helped the Cavaliers beat Cedarville as he scored a season-high and game-high 24 points on 9-of-15 shooting from the field to go along with seven assists, two steals and two rebounds.

In a preseason exhibition game at Ohio State, the Cavaliers lost 92-82. Carter scored 21 points with six assists and Fletcher had 13 points and seven rebounds.

“Playing the Ohio State game, we just felt like we had something to prove. I felt like everybody was already down on us coming into the game because it’s Ohio State,” said Carter.

“I’m not going to back down from nobody, I don’t care who we’re playing.”

“We just wanted to prove to everybody we could play with them. D2 is no slouch. There is a difference. They have bigger guys. We wanted to proved we could beat them,” said Fletcher.

The duo has been proving they can play since grade school. The two were teammates then, during the summer, and on through their high school careers at Ironton where they helped the Fighting Tigers to the Division III Final Four in 2012.

Having played together for so long, the two have a telepathy between them that they use even at Walsh.

“And everybody on the team understands the chemistry that we have, so coach likes to put us in two-man games so we’re able to create for myself and put (Fletcher) in position to score, too.”

Fletcher said the chemistry was evident in a recent 71-63 win over Cedarville. Carter scored 24 and Fletcher 23 and impressing Cedarville coach Pat Estepp who once coached at South Webster.

“We know where each other is going to be on the court all the time. It’s that same pick and roll. The Cedarville coach is from South Webster and he said ‘those Southern Ohio boys got us,’” Fletcher said with a laugh.

Fletcher tips the scales at 6-foot-6, 220 pounds while Carter registers at 5-9, 160 pounds. Fletcher said his size isn’t much different than in high school, just redistributed.

Fletcher isn’t the only one to benefit from the college training. With Walsh University in Canton, Carter has been able to take advantage of hometown native C.J. McCollum and his brother Errick. C.J. plays for the Portland Trailblazers and Erric plays professionally in Europe.

Carter said his game has improved thanks to the brothers, and Walsh head coach Jeff Young and his staff.

“Just my workouts in the summer (have improved his game). I’ve got a lot of guys up there to help me. I’m with (C.J.) every day and his brother who plays in Turkey. Those two guys right there have been key in my success. And my coaches just help me get better every day,” said Carter.

Fletcher said Young — an outstanding shooter as a player — stresses shooting fundamentals and that has helped him become a better outside shooter to go with his inside game.

“My inside-outside game has got a lot better. We have 5-minute shoot and if you don’t get your number, you run,” said Fletcher.

The GLIAC has some of the best NCAA Division II programs including nationally ranked Lake Superior and Ashland.

“That conference is a good conference. Every night you play a good team. You’ve got to bring your ‘A’ game every game. You can’t slack or somebody is going to beat you. You’ve got to prove yourself every night,” said Carter.

“The competition night in and night out you have to play well or you get embarrassed. You can’t take any breaks. You have to stay strong-minded and will your way through it,” said Fletcher.

While every game is tough, Carter admits that one team is always circled on the schedule — Canton-based Malone College.

“We’ve got three goals every year: beat Malone, win the league and win a national championship. It’s the same every year,” said Carter. “We want to beat Malone.”

Although they are entrenched in basketball, Fletcher said the school stresses the academic aspect first.

“We got three hours of study table, lunch, dinner and homework. They just schedule it nice. Our freshman year was a little crazy, but now that we’re juniors we’re used to it. The coaches walk by the classroom and you better be there. You don’t want the punishment,” said Fletcher.

“But Walsh is great. I love it. Me and Zac both love it.”