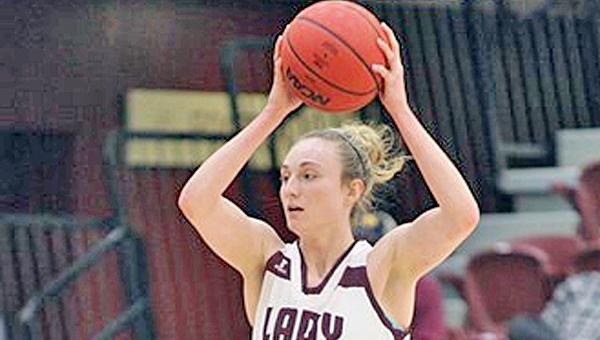 CHESAPEAKE — It’s only fitting that Amanda Ruffner is a criminal just and florensic psychology major because what’s she’s doing to the opposition is a crime.

The 5-foot-10 Fairmont State Lady Falcons red-shirt junior forward is leading her team with a 17.7 scoring average and she is third on the team with a 5.3 rebound average. She is shooting 60 percent from the floor and 65 from the foul line.

The former Chesapeake Lady Panthers’ second team All-Ohio selection said being thrust into a leadership role has made the difference in her performance.

“My role changes year to year and it’s much more significant this year,” said Ruffner.

“The biggest thing is after losing three seniors last year who contributed our biggest margin of scoring I knew that I had to step up and fill their shoes. Being an upperclassman I have the confidence and the experience.”

This season Ruffner had a career-high 21 points three times and a career-best 10 rebounds against Glenville State.

At Chesapeake, Ruffner averaged 23.4 points and 10.4 rebounds her senior season with 4.0 blocks and 2.8 steals a game. She finished with 1,356 career points.

In between, Ruffner said there was a quite an adjustment period.

“It was rough. I can honestly say it was a huge transition. It was more intense than I thought it would be, but it was a growing experience. I was glad I red-shirted (her freshman year). I got to watch other people and learn.”

While Ruffner usually plays forward, she has been playing her former center position the past few weeks due to an ankle injury to the Lady Falcons’ starting center.

“I prefer the four. I’m faster and I’m used to running the floor. When I play the four, it’s a bigger lineup. When I play a five, we’re smaller but we’re faster. That makes us harder to defend.”

Although Ruffner has had some big games and success this season, she said that winning the conference her freshman season was her best memory so far.

“The most exiting thing — even though I wasn’t playing — was winning the WVIAC conference championship in Charleston. It was the last year for the league and the seniors had won it as freshmen. Just being part of that experience and seeing seniors being able to leave with a championship was exciting.”

Ruffner can opt for another year and use the time to pursue a masters. She said that and her friendships will determine her decision.

“Other than (winning the championship), the relationship with my team is the biggest thing I’ve experienced. These are life-long friendship, not just while I’m here,” said Ruffner.

COLUMBUS — Motivated or unmotivated? That might be the biggest question about Ohio State going into its Fiesta Bowl game... read more