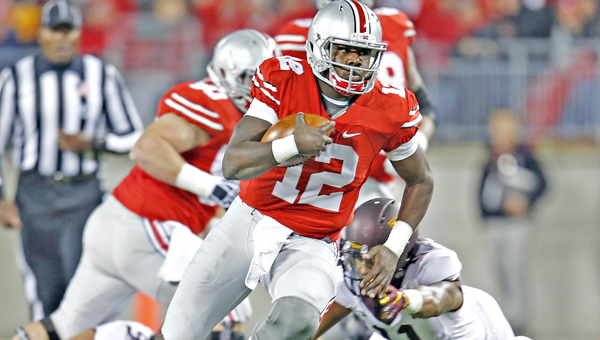 SCOTTSDALE, Ariz. (AP) — Cardale Jones hinted at leaving Ohio State for the NFL after the Buckeyes lost to Michigan State.

He made it more concrete on Wednesday, telling reporters he will skip his senior season and declare for the NFL draft.

“I want to be remembered for the positive things I did here,” he said as the seventh-ranked Buckeyes prepare to face No. 8 Notre Dame in the Fiesta Bowl on New Year’s Day. “I think I had more ups and downs. I think I’m going to leave a pretty good legacy here.”

Jones was Ohio State’s third-string quarterback last season before bursting onto the scene, leading the Buckeyes to a national title after injuries to Braxton Miller and J.T. Barrett.

The junior began this season as Ohio State’s starter before being replaced by Barrett after seven games due to inconsistent play. Jones threw for 1,460 yards, eight touchdowns and five interceptions.

He is on track to graduate in June and could have played immediately at another school as a graduate transfer, but said that was never an option.

“My heart is at Ohio State,” he said. “I would come back and sit another year before I would transfer to any school.”

Mobile at 6-foot-5, 250 pounds, Jones could be an intriguing early-round pick in the draft.