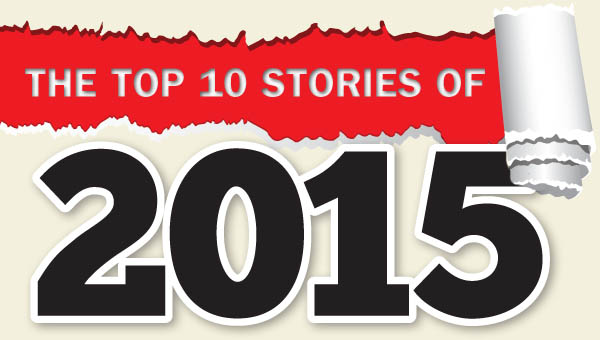 It took several goes at it, but Ironton got its first woman mayor in 2015. Katrina Keith, Ironton’s former city benefits specialist, took 71 percent of the vote in a runoff election on Nov. 17. She trounced Ironton City Councilman Bob Cleary, who got only 32 percent of the vote. Two weeks earlier, Keith failed to get the mandatory 40 percent of the vote required by the city charter to claim victory, missing it by less than 5 percent. In that race Cleary joined Keith in the top two spots with John David Willis and James Tordiff coming in third and fourth. Keith vowed to make a difference in the city focusing on downtown revitalization.

“We have to clean up this city,” she said on election night.

Three Lawrence County corrections officers were found not guilty in October of abusing a prisoner in an almost two-week long trial in U.S. District Court, Southern District of Ohio in Cincinnati. Jeremy Hanshaw, Ronald Hatfield and Jason Mays were indicted after an Aug. 19, 2014, incident where the trio had been charged with allegedly mistreating Larry Kinstler. Kinstler had been arrested for disorderly conduct during the Rally on the River.

All three were charged with conspiracy against rights and deprivation against rights under the color of the law and aiding and abetting. Among the evidence admitted in the trial was a video from jail cameras. The verdict came after three days of deliberations. Because of union rules, Hanshaw and Hatfield were placed on administrative leave. Because of that, they were re-instated within a month. Mays, who had not worked long enough to be in the union, was fired and not rehired.

For years, the Lawrence County Jail has come under fire for not meeting state standards. The county has constantly been afraid the 40-year-old facility will be shut down. The state has declared that no more than 26 inmates should be housed there at any one time. However, daily census could range from 70 to 100, depending on the season.

At last, it looked as if Lawrence County Sheriff Jeff Lawless was going to get some help. The state was offering a 100-bed unit at the now closed Ohio River Valley Juvenile Correctional Facility in Franklin Furnace in neighboring Scioto County.

The Lawrence County Commission formed an ad hoc group to research the offer. At first, the commission voted to make the move, even signing a 15-year lease for $1 a year with the state. The remaining of the ORV was to go to STAR Community Justice Center next door, which was in need of more space following program expansion.

Then, before year’s end, the commission reversed itself, flatly saying there was no money to make the move.

To pacify the state to some degree, Lawless started sending inmates out of county, predominately to Morrow County, costing the county approximately $50,000 a month.

He has been keeping the jail census down to the mid 50s.

While the sheriff has struggled to pay those costs, the commission gutted one of his funds to give to the Lawrence County Fair Board.

A transfer of $50,000 from various accounts in the general fund went to the county’s agriculture society. The largest transfer was $34,924.88 from the sheriff’s office account to pay for leases for some cruisers. Since there were no more lease payments for the year, no more transfers were expected out of it.

At approximately 2 a.m. on a Friday in April, a 1,500-ton boulder broke loose from the hillside by U.S. 52, between Crabtree Hollow Road and the twin bridges going into Ashland and Coal Grove. No one was on the highway at the point of contact when it fell.

From that moment until mid-morning, all four lanes of the highway were shut down.

Ohio Department of Transportation and DGM Inc. crews used track hoes and jackhammers to slowly smash the rock down.

Within 24 hours, the rock was reduced by nearly 40 percent with crews hauling away 42 loads of broken rock weighing 340 tons. Within days, the boulder was completely smashed up and hauled away to the county garage in the south end of Ironton.

A February fire at Gary Malone Mobile Home Park off Little Solida Road in South Point claimed the lives of a mother and her three children.

Ashley Mays, 24, her son Elijah, 5, and 11-month old twin boys, Preston and Anthony Walker, died in the home on Wednesday, Feb. 11. According to Steve Harrison of the South Point Fire Department, the call about the fire came in at 8:41 a.m. Two other people lived in the trailer, but were not home at the time of the fire.

According to the State Fire Marshal, the cause of the fire was ruled undetermined.

Neighbors said the park was a tight-knit community who always helped each other out and remembered the victims as very nice people who are dearly missed.

As far as those, the Catlettsburg site had been affected by staff reductions and overtime, according to union representatives.

The strike lasted for nine weeks nationally and concluded in April, after a majority of workers approved a contract offer by Marathon.

Employees at Haverhill Chemicals, on the border of Lawrence and Scioto counties, learned they were out of a job this summer.

More than 60 workers in the Tri-State Building Trade union were laid off in June from the 54-year-old plant. In August, 75 percent of the plant’s workforce learned they were facing unemployment.

On Sept. 21, Altivia Petrochemicals announced that it had signed a definitive agreement to acquire all of Haverhill Chemicals’ assets. In order to implement the sale, Haverhill filed for Chapter 11 relief in September. Altivia hoped up to 150 employees could work at the plant once the sale was approved.

Across the river in Ashland, AK Steel announced in October that it was temporarily shutting down the blast furnace at its plant, laying off hundreds of workers. Those layoffs took place in four-phases and affected more than 600 employees.

The decision was due to competition from imported steel from China, officials with the company and union said. The company said it would continue hot-dip galvanizing at the plant.

Lawrence County Commission President Les Boggs was arrested on Nov. 4 for the second time in two years, for domestic violence. This first incident was allegedly with his then estranged wife. Those charges were dropped. This time, a woman who was living with Boggs accused the commissioner of attempting to choke her and backhand her following an argument. She also alleged that he threw her cell phone into a pond at his home. At the time of his arrest, Boggs was charged with domestic violence, a misdemeanor, and disrupting public service, a felony. A special prosecutor and judge were brought in to hear the case in Ironton Municipal Court.

The commissioner pleaded not guilty at his arraignment, but no contest at the following hearing, after the domestic violence charge was dropped and the felony reduced to disorderly conduct. At that hearing, the alleged victim said she did not want to pursue the charges. Boggs was fined $200 and court costs.

Dr. Richard Paulus, a retired cardiologist at King’s Daughters Medical Center, pleaded not guilty on Sept. 24 to one count of health care fraud and 26 counts of willfully and knowingly making false statements.

A Lexington grand jury indicted him on Sept. 3, stating Medicare had paid in excess of $300,000 to King’s Daughters Medical Center for in-patient cardiac stent placement performed by Paulus. The Kentucky Board of Medical Licensure said the “prevailing scenario” was for patients with chest pains and few risk factors for heart disease to immediately undergo a coronary angiography.

September marked a big change in Ironton, as Glockner purchased the Bob Clyse Chevrolet-Buick-GMC dealership on Third Street in a buy-sell agreement approved by General Motors.

Clyse owned the dealership for more than 40 years and said it was the right time to make the move, as consolidations are taking place all over the country.

Owner Tim Glockner, who now adds Glockner of Ironton to Glockner South Point Ford, Glockner Honda and Toyota and Glockner GM Superstore in Portsmouth, retained all 46 employees from the dealership, something he said was the most important thing to Clyse.

Clyse said he and Glockner have a very good relationship, which made the transition very smooth, and that he was happy turning the company over to him.

The man responsible for one of the deadliest fireworks fires in the country died in 2015. Todd Hall, 43, died in early March. He had been hospitalized at the Appalachian Behavioral Healthcare Center in Athens since the 1996 fire that killed nine and injured dozens. The fire started after Hall tossed a lighted cigarette into the store. He had suffered brain damage from an earlier accident. He was never convicted, because every two years, in competency evaluations, he was never found capable of standing trial.