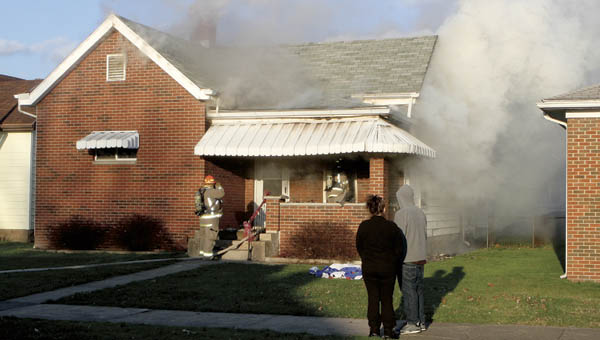 The fire is believed to have started in the living room of the home on South Seventh Street.

A house fire destroyed a home in the 1800 block of South Seventh Street in Ironton on Friday afternoon.

“We got the call shortly after 4 p.m.,” Ironton Fire Chief Mike Mahlmeister said. “We were on scene until about 6:30 p.m.”

Mahlmeister said both homeowners were in the home at the time of the fire, with the husband watching a football game in the back while his wife was asleep.

“The cable went out and the husband went inside to see what happened when he noticed smoke coming out of the house,” Mahlmeister said. “He woke his wife up and they got out of the house. The front living room is completely burned out and the rest of the house suffered considerable smoke and heat damage.”

According to Mahlmeister, it is believed the fire started from an electrical outlet in the living room with a live Christmas tree still plugged in, although the official cause is still under investigation.