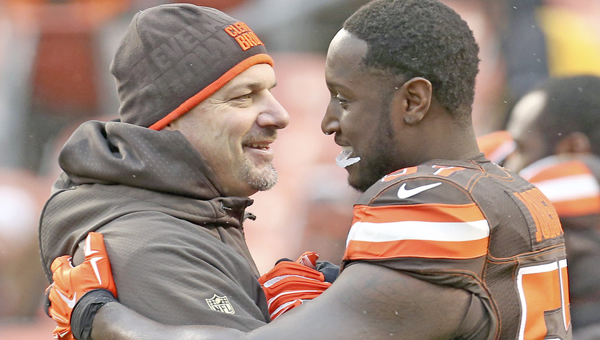 Cleveland Browns head coach Mike Pettine gets a hug from Cam Johnson before the game against the Pittsburgh Steelers on Sunday.Pettine was fired after Sunday’s game along with general manager Ray Farmer. (MCT DIRECT PHOTO)

CLEVELAND (AP) — The Browns changed uniforms to start the season and their coach and general manager to end it.

Pettine went 10-22 in two years, dropping 18 of his final 21 games after a promising 7-4 start in 2014. Pettine’s job security had been in doubt for months, and not even Haslam’s vow at the start of training camp not to “blow things up” could stop another regime change in Cleveland.

Pettine was the team’s seventh full-time coach since 1999, and the team has changed coaches and GMs five times since 2008.

“We greatly appreciate Ray’s and Mike’s dedication and hard work while with the Cleveland Browns,” said Haslam, who owns the team along with his wife, Dee.

“We’ve made this decision because we don’t believe our football team was positioned well for the future. We are all disappointed with where we are and we take full responsibility. We will approach the search for our next football coach and executives to lead our football operations with a clear vision regarding what we need to do to build a successful organization.

“We will be methodical in looking for strong, smart leaders with high character who are relentlessly driven to improve our football team, willing to look at every resource possible to improve, and who embrace collaboration to ultimately make the best decisions for the Cleveland Browns. We are fully committed to bringing our fans the winning organization they so clearly deserve.”

A former defensive coordinator, Pettine’s ouster can be partly linked to the performance of his defense, which ranked at or near the bottom in the league in nearly every statistical category.

Pettine is the fifth Cleveland coach in eight years to lose his job following a season-ending loss to the Steelers.

Haslam said the team will immediately begin a search for its eighth full-time coach of the expansion era. The Browns have hired a consulting firm to assist in the search.

“We want to get the right person,” Haslam said. “I don’t know if it’s going to take two weeks or two months.”

Once the Browns have their coach, they then hire a GM. Haslam said Sashi Brown has been promoted to vice president of football operations and will have control over the 53-man roster.

Haslam still believes the Browns are attractive to quality candidates and downplayed the idea the team needs to make a “splash” with its coaching hire.

“We want to find the right head coach who I believe will be the leader of the team and the face of the franchise,” said Haslam, who returned to FirstEnergy Stadium following a meeting with Pettine at team headquarters in Berea, Ohio. “We are very determined to get that right person.”

“It should be a topic of speculation, given what our results have been,” Pettine told reporters. “It is a bottom-line business and you guys don’t have a column in the newspaper for moral victories. Our record is that we have won three of our last 21 games. That is just not good enough.”

It hasn’t helped that the Browns lacked talent, especially offensive playmakers and that was Farmer’s fault.

The Browns have whiffed on high draft picks, wasted money on a defense that showed little improvement, and remain at the bottom of one of the NFL’s toughest divisions.

Farmer, too, was suspended for the first four games this season for texting to the sideline during 2014 games.

One of his biggest mistakes over the past two years appears to be the decision to draft quarterback Johnny Manziel. The 2012 Heisman Trophy winner hasn’t lived up to expectations on the field and continues to be a headache off it.

He spent 73 days in a rehab facility during the offseason, got benched by Pettine for two games during the year for misbehavior and missed Sunday’s game with a concussion. While his teammates finished the season, Manziel was reportedly in Las Vegas.

CINCINNATI (AP) — Bengals coach Marvin Lewis was so engrossed in his team’s ugly win that he had to ask... read more