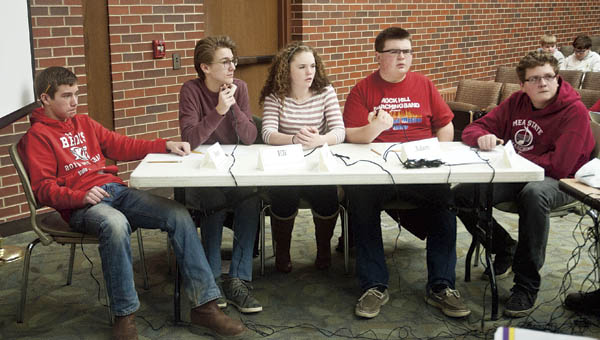 After six hours of game play and several matches, Rock Hill emerged as the winner of the Lawrence County Middle School Quiz Bowl Tournament on Tuesday at Ohio University Southern.

The two final teams were so closely matched that the event ran longer than expected, exceeding the length of the school day.

Runner-up Symmes Valley lost their first match and were moved into the losers’ bracket and spent the day going through six matches to get back to into contention.

Rock Hill had not lost a match by the time they faced Symmes Valley in the final match. As a result, Symmes Valley was required to beat them twice, as it was a double elimination tournament.

Symmes Valley won the first face-off with Rock Hill, making things even for the final round.

At first, the score between the two teams remained even in the final match, then Rock Hill pulled ahead in the lightning round to win the tournament.

Trina Haynes, who is the gifted coordinator at Rock Hill, serves as the team’s coach.

She said it was the school’s second consecutive year winning the county tournament and that it felt “awesome.”

“We’re going to be singing ‘We Are the Champions’ on the way home,” she said.

Haynes said there is a strong overlap between the gifted program and the Quiz Bowl team, though the competition is open to everyone at the school.

“I’m one proud teacher,” she said. “I’ve had some of these students five consecutive years, from grades four through eight. They’re like my kids.”

Fleeman, who has been the team’s top scorer for two years running, was a part of the final match, where the line-up consisted solely of eighth graders.

“It feels absolutely wonderful, especially with it being our second year of wining.” he said.

Kim Wells, the student services director at the school, was proud of their ability to come from behind and make it to final match.

“We are very excited we made it this far,” she said. “We started out in the losers bracket and worked our way back up.”

The annual tournament is sponsored by the Lawrence County Educational Services Center and Ohio University Southern.

A tournament for high school students is set for March, she said.

Kara Speed, the coach for Fairland, said her team had been eliminated from the tournament about three-fourths of the way through.

However the school was honored for being the regular season champions of Quiz Bowl, taking the top spot in the year-round head-to-head matches between schools.

Fundraiser going on to pay for supplies

Decorative wood plaques available Right now there aren’t as many dogs and cats at the Lawrence County Animal Shelter as... read more