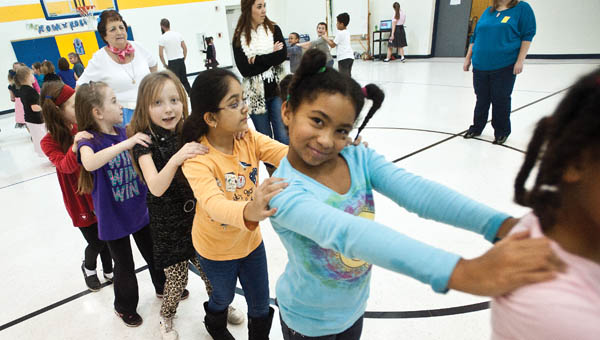 Rachae Patrick is in the conga line during the annual Sock Hop event at Burlington Elementary School Friday.

BURLINGTON — Burlington Elementary students traveled back to the 1950s on Friday.

The school’s annual sock hop was for children who had demonstrated good behavior.

Children, teachers and parent volunteers were dressed in ‘50s attire and enjoyed conga lines, hula hooping, dancing and a limbo bar while songs from the soundtrack to the film “Grease” played.

Principal Sarah Nuckols said the event was for good behavior in the most recent 9-week period of the school calendar. Different-themed activities are four times a year to reward the children.

“If they haven’t been in trouble, they get to participate,” she said, noting that the 380 of the school’s 400 students taking part was a record.

Nuckols said the party was sponsored by volunteers from the school’s Parent Teacher Organization.

One of the volunteers was Meredith Rakes, whose grandson attends the school. She said she’s been involved with the annual sock hop for a few years.

“I’m involved in everything here,” she said. “I pretty much live at the school. They’re a good group of kids.”

Following the party in the gym, the children went to the cafeteria, where they were served root beer floats by the parents.