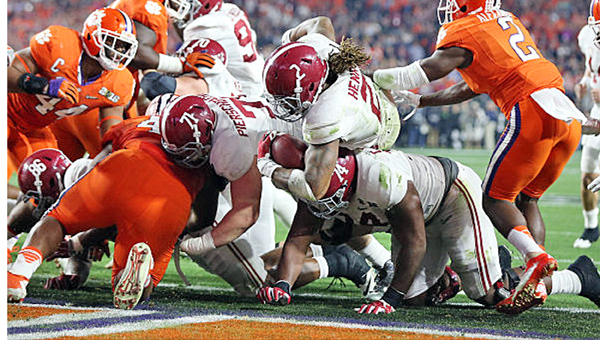 GLENDALE, Ariz. (AP) — Alabama needed it all to win the toughest national title game it had ever played during the Nick Saban dynasty. All of its power. All of its speed.

Even one gutsy trick.

The Crimson Tide (14-1) won its three previous championship game appearances in runaway fashion. This game was an instant classic — a welcome relief for fans who sat through the blowouts that turned the New Year’s Six lineup into a dud. It finally turned on maybe the boldest call of Saban’s career.

“This was a great challenge for us,” Saban said.

With 10:34 left in the fourth quarter and Alabama having just tied the game with a short field goal, Saban took a gamble to try to keep the ball away from Watson and the Tigers. He called for a popup onside kick that Alabama defensive back Marlon Humphrey caught over the shoulder at midfield.

“I think that changed the momentum of the game, and our guys finished it,” Saban said.

Moments later, Alabama took back the lead. For the second time, Clemson (14-1) lost track of the tight end Howard in coverage and Jake Coker hit him in stride deep for a 51-yard touchdown to make it 31-24 with 9:45 left.

Clemson and Watson proved to be every bit Alabama’s equal. The Tigers just kept coming.

Watson led Clemson to a field goal to make it 31-27, and boom! Another Alabama big play. Drake broke free and streaked down the sideline for a 95-yard kickoff return touchdown, diving the last 5 yards to the pylon.

Watson threw another touchdown pass, but would not get another chance. Clemson’s onside kick went out of bounds. Coker took a knee and after a two-year drought that felt like eternity in Tuscaloosa, Alabama was back on top.

The Crimson Tide became the second team in college football’s poll era, dating back to 1936, to win four titles in seven seasons.

Alabama joins Notre Dame, which won four titles from 1943-49. For Saban, it is his fifth national championship — four in his nine seasons at Alabama — leaving him only one short of former Tide coach Bear Bryant for the most titles in history.

Watson gave the Tide all it could handle, throwing for 405 yards and four touchdowns, and conjuring up memories of Vince Young’s miraculous performance for Texas in the 2006 Rose Bowl that derailed Southern California’s dynasty.

The sophomore, who finished third in the Heisman Trophy voting, had 478 total yards against a loaded Tide defense that was the toughest in the country and bested Young’s 467 yards against the Trojans. But Watson couldn’t finish the job the way Young did in Pasadena, California.

Instead, Saban and the Tide raised another trophy, its first in this new playoff system, and got another confetti shower. It is the Tide’s 10th national title in the poll era, more than any other school.

The Tide hit Clemson early with Henry, who scored the game’s first touchdown on a 50-yard burst through the middle. He finished with 158 yards on 36 carries. Howard was the offensive player of the game with five catches for 208 yards, including a 63-yarder that set up Alabama’s final score.

After Watson and walk-on Hunter Renfrow hooked up for two touchdown passes to give Clemson a 14-7 lead at the end of the first quarter, Henry tied it up with a 1-yard plunge.

Back and forth it went.

Throughout Alabama’s unprecedented run under Saban, the Tide was hardly challenged in a championship game. Alabama pulled away from Texas for Saban’s first Tide title. Alabama blanked LSU for No. 2 and crushed Notre Dame to repeat.

Trying to become the first FBS team to go 15-0, Clemson did not crumble under the force of Alabama’s might. But all those five-star recruits and future NFL players that dot the Alabama roster showed they also have plenty of resiliency and toughness. And Saban, the quintessential CEO coach, showed he had a little riverboat gambler in him.

That onside kicked stunned the stadium and Clemson, and brought a big grin to the face of the country’s most serious coach.