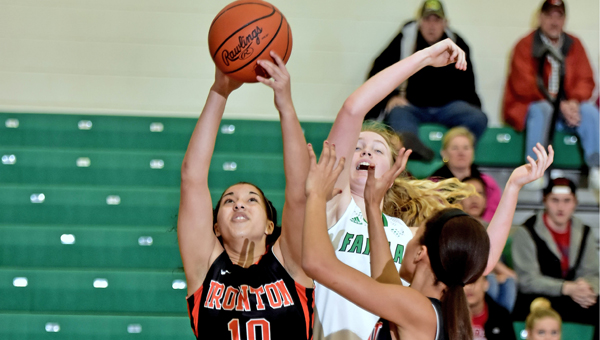 With the Ironton Lady Fighting Tigers clinging to their lead over the Fairland Lady Dragons, Barrier stepped up and made the plays in the clutch as Ironton came away with a 44-34 Ohio Valley Conference win on Thursday.

The two teams kept trading blows with Fairland getting within 33-31 with 5:33 left following a layup by Emma Fulton.

“Everybody knows (Barrier’s) offensive prowess and that she can score the ball, but she had a tremendous game on the other end of the floor. She came up with big-time steals, rebounds. She had a good game,” said Ironton coach Doug Graham.

“We had the same kind of issue last year. We had a really good game and Lexie took over in the fourth quarter. That’s what really good players do,” said Buchanan.

“It’s a credit to her. We had a kid there, she just made the play.”

Ironton is now 14-0 overall and 10-0 in the OVC, extending its lead over Fairland to two games.

The Lady Dragons are 11-2 and 7-2 in the league with both losses coming to Ironton.

However, the Lady Dragons showed great strides as they erased the memories of an early season 68-26 loss at Ironton.

“I was really pleased with our effort. We’d love to get a win, but I know we’re better than 42 points than what we were the last time,” said Buchanan.

The Lady Tigers played well defensively including the first quarter when they forced nine of Fairland’s 22 turnovers.

“We’re athletic and long and we cause a bunch of problems,” said Graham.

A 3-pointer by Emily Chapman — she had four on the night — gave Fairland its only lead of the game at 3-0.

Ironton scored 12 unanswered points with Cheyenne Scott scoring four points and Sydney Webb and Lewis hitting treys. Chapman hit another triple before the end of the quarter and it was 12-6.

Barrier drained back-to-back 3-pointers as Ironton took an 18-8 lead with 5:45 to play in the half, but the Lady Tigers struggled from the field and Fairland battled back to within 24-18 at the half.

“We had that stretch in the first half where we turned it over four or five straight times and we couldn’t run out stuff,” said Buchanan.

“But again, (Ironton) didn’t extend (the lead), because we kept getting stops, too. But I felt like we had some empty possessions that really hurt us. I don’t know how many times we turned it over but it was quite a bit.”

Barrier made a foul shot, but Ironton missed its first eight shots of the third quarter. Kelsie Warnock hit a 3-pointer and Taylor Perry a 17-footer as Fairland cut the lead to 25-23 at the 3:36 mark.

But the Lady Tigers finally picked up their offense in the fourth quarter by making 6-of-10 shots with Barrier going 3-for-5.

The strong fourth quarter enabled Ironton to finish 18-of-45 from the field for 40 percent.

Ironton was able to limit the Lady Dragons to just 12 field goal attempts in the second half and they were 3-of-6 from 3-point range.

“What really stuck in my mind is they cut it to one possession a couple of times and I felt like we didn’t panic. I felt like we were trying to execute the (game) plan,” said Graham.

“Good teams find ways to win. If one thing is down, you win other ways, either defensively or rebounding or what have you. It was just two team getting after it and playing hard. It was a good game. I think the fans got their money’s worth.”

Jim Walker jim.walker@irontontribune.com   COAL GROVE — This time the Coal Grove Lady Hornets did what they can do. Everyone... read more