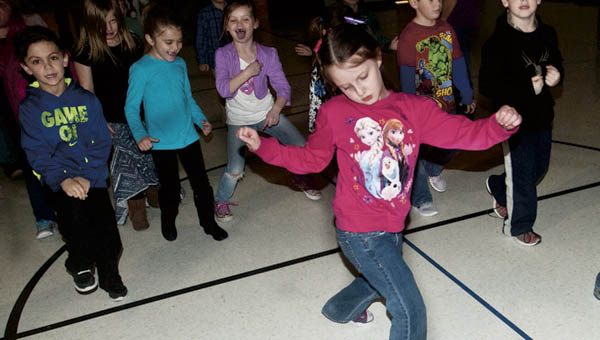 Ariane Cooper gets her groove on during the South Point Elementary dance party.

SOUTH POINT — Students at South Point Elementary were rewarded Thursday for their good behavior, in the form of a dance party with a live DJ.

Dave Glen, who is retired from a long-time position on-air at V100 in Charleston, West Virginia, came to the school’s gymnasium, bringing with him a bank of sound equipment and a show of lights.

Glenn entertained the children with current hits and invited them to participate in contests, using their imaginations to pretend they were jumping on trampolines, act like they were butterflies in flights or showing their “ugly face.” The best dancers won prizes, such as jump ropes, necklaces and other items.

The party was broken down into three sessions, for the school’s different grades. After about 45 minutes of dancing, students were served ice cream.

Administrative assistant Bill Christian said the party is for students who had “a clean, spotless record,” with no disciplinary tickets received at school or on the bus. He said about 300 of the school’s student body of 380 got to attend.

Various events, such as inflatables, a carnival and magic show, are scheduled throughout the school year for good behavior.

Glenn also works as an artist at Tamarack in Beckley, West Virginia, where he sells prints of his colored pencil drawings of animals, one of which he gave out as a prize at the party.

He said he enjoys working with children, first doing so with a juvenile program as a member of law enforcement for two years.

He said one thing he took away from the work was the value of rewards over punishment.

“Rewards have a positive outcome,” he said. “I have a passion for this”