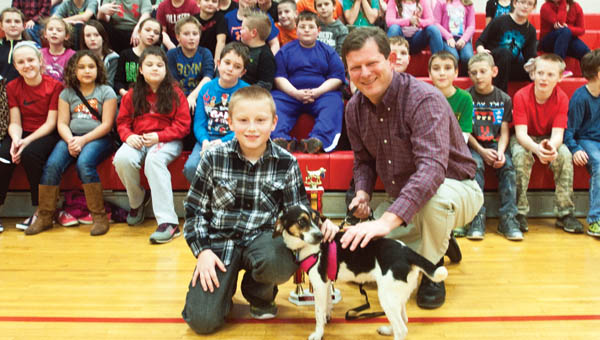 Callicoat wrote his essay as part of the county top dog essay contest sponsored by the Lawrence County Auditor’s Office, which was open to all fourth and fifth graders in the county to write about why their pooch deserves the honor.

The contest is a way for the auditor’s office to increase participation of dog licensing in Lawrence County.

“It makes me so happy to win. I’ve never felt that way when I won something before,” Callicoat said. “I wanted to inspire myself and actually win something and honor my dog.”

Callicoat said he got Lady this past Thanksgiving and knew he wanted to be a part of the contest as soon as he found out about the opportunity from his teacher.

“When she first told us, I knew right then I wanted to do it,” he said.

In the winning essay, Callicoat talked about Lady’s playfulness and ability to open doors and hunt rabbits.

He received a trophy for his accomplishment as well as a personalized dog tag for Lady.

“I really appreciate the kids who took the time to submit an essay,” Stephens said. “We have some great dogs in Lawrence County, and it is certainly entertaining to hear what young owners have to say about their dogs.”

2016 dog tags are currently on sale at the auditor’s office for $12 or Tipton’s on State Route 93, Jim’s Gun Shop and the BMV in Proctorville and Dickess Market on State Route 141 in Aid for $12.75 through the end of January. They can also be purchased for $14 online on the Lawrence County Auditor’s Office website.

SOUTH POINT — A South Webster company is the apparent low bidder in an upcoming project to buttress the hillside... read more