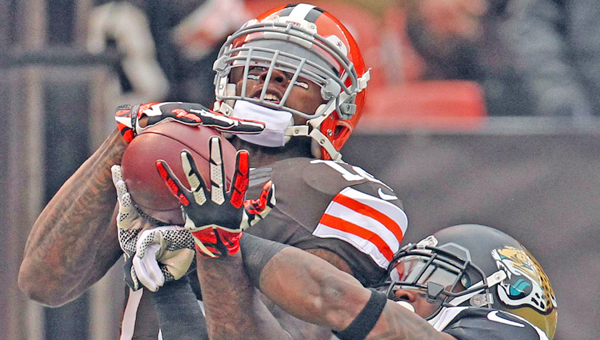 CLEVELAND (AP) — Josh Gordon has asked the NFL for another chance.

The suspended Browns wide receiver applied to the league for reinstatement, a person with direct knowledge of the process told the Associated Press on Wednesday. Gordon, who was banned for a year in February for multiple violations of the league’s substance abuse policy, formally asked Commissioner Roger Goodell to allow him back, said the person who spoke on condition of anonymity because of the sensitivity of the situation.

According to league policy, Gordon could apply in writing for reinstatement within 60 days of his suspension ending. For Gordon to be reinstated, he will have to demonstrate sustained abstinence during his suspension.

Gordon will also be interviewed by the league’s medical director and medical adviser, who will make a recommendation to Goodell on Gordon’s reinstatement. Goodell will make a decision within 60 days of Gordon’s application. If he can return to the Browns, he will be under contract for 2016 for nearly $1.1 million and can become a restricted free agent following the season.

A big-play threat whenever he touches the ball, Gordon made the Pro Bowl in 2013 when he led the league with 1,646 yards receiving despite playing just 14 games. Gordon had nine touchdowns that season, establishing himself as one of the league’s elite pass catchers.

However, he hasn’t been able to stay out of trouble.

After Gordon pleaded guilty to driving while impaired on July 5, 2014, in Raleigh, North Carolina, he was required to submit to alcohol testing under the third stage of the league’s mandated program. Gordon said he drank on a flight to Las Vegas a few days after the 2014 season ended and failed a subsequent test. Gordon had assumed any restrictions ended after the season, but he didn’t clarify that with the league.

Gordon was initially suspended for the 2014 season after testing positive for marijuana. His penalty was later reduced to 10 games after the league and NFLPA changed their substance abuse policies. Gordon had to sit out two games in 2013 for a failed drug test, which he blamed on taking prescription cough medicine.

Gordon entered the league with questions about his character after testing positive three times for marijuana in college. The Browns took a shot on him anyway, surrendering a second-round draft pick in 2013 to select him in the supplemental draft that year.

Quiet and unassuming off the field, the 24-year-old Gordon’s ability to turn an 8-yard reception into an 80-yard TD has the Browns hoping he can stay clean.

At his introductory news conference last week, new coach Hue Jackson, who worked with Pro Bowl wide receiver A.J. Green in Cincinnati, was non-committal about his plans for Gordon.

“What I’m anxious to do is evaluate him just like we’re going to evaluate every player on our roster and see if they are the right fit for the Cleveland Browns,” Jackson said. “That’s what we have to do with every player, whether that’s Josh Gordon to whoever the last guy is on the roster.”

Jim Walker jim.walker@irontontribune.com   GALLIPOLIS — It was a fast start and a fast finish for the Chesapeake Panthers. Chesapeake... read more