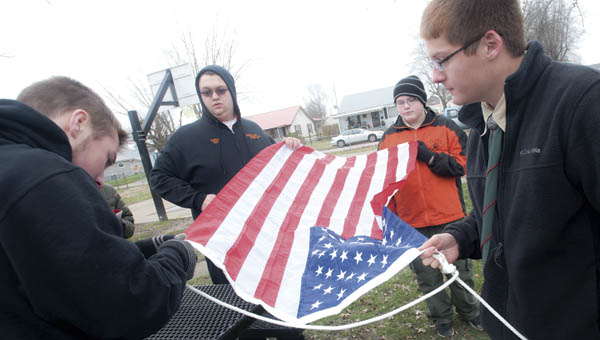 Pictured left to right, Wyatt Boggs, Parker Rowe, Dylan Spurlock and Cory Rawlins, work to put together and erect a new flagpole at the Edna Kopacz Park in Ironton.

One of the requirements to become an Eagle Scout is a community project approved by the local Boy Scout committee. This past Saturday, Cory Rawlins, Ironton High School senior and member of Ironton Boy Scout Troop 106, completed his project by putting an American flag at Edna Kopacz Park.

“I got the idea from the (St. Mary’s) Veteran’s Memorial Day 5K committee,” Rawlins said. “They proposed putting a flagpole in the park and funded it.”

Rawlins said he liked the idea of putting a flag in the park because it was renovated last year as part of another Eagle Scout project.

“We have money to spend on stuff related to veterans and we wanted to promote flags,” Kevin McCown, treasurer of the St. Mary’s Veteran’s Memorial Day 5K committee, said. “We gave him $600 for the project.”

A plaque with Rawlins’ name on it was also placed at the base of the flagpole.

A foot of snow likely for county

Snowfall expected to run tonight until mid-Saturday Lawrence County received a coat of snow Wednesday, but it was a minor... read more