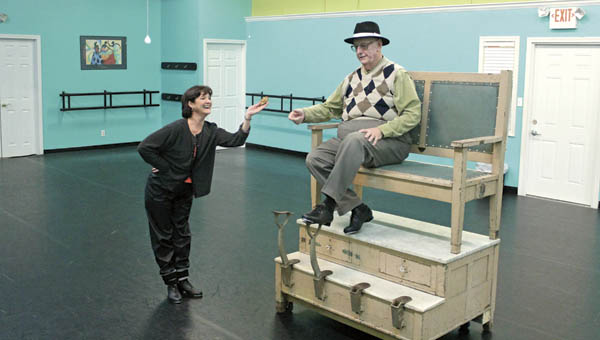 Maria Whaley and Steve Towler practice their tap dance routine for the Dancing with our Stars fundraiser put on by the Highlands Museum and Discovery Center.

Thirty years as an educator, 20 years as superintendent and now leader of his county of Boyd, Steve Towler with the help of Ironton choreographer Maria Whaley, plans to add dancer extraordinaire to his resume.

That’s because Towler, Boyd County judge executive is one of this year’s Dancing with Our Stars participants.

Taps clicking on his shoes, a zoot suit and a white band around his black fedora,

Towler will perform a duet with Whaley to the 1950s Billboard hit, “Chattanooga Shoe Shine Boy.”

“When I was 5 or 6 years old, I would sing a little bit,” Towler said. “My parents would say ‘Sing that’ and I would get some applause.”

Whaley said she turned the number into a tap dance because the music lends itself to that kind of rhythm.

“We talked about music and he picked out that song,” Whaley said. “I’ve also put a little swing in it.”

Dancing with Our Stars is a major fundraiser for the Highlands Museum and Discovery Center in Ashland mirroring the national television show. This time local celebrities are partnered with professional Tri-State dancers.

There will be a gourmet dinner catered by Bellefonte Country Club followed by the competition. Then the floor will open up to the guests for dancing to the music of Basic Black.

Each pair of celebrity dancers competes for votes to win the Mirror Ball Trophy. Votes are $1 and can be made on Paypal at www.highlandsmuseum.com/dwos or at the museum at 1620 Winchester Ave.

Towler agreed to be part of the competition because of his years-long involvement with the museum and his years of teaching with museum director Carol Allen in the Russell, Kentucky, school district.

“Carol Allen is an old friend,” he said.

This year’s event is 6 p.m. Feb. 6 at the Boyd County Community Center.