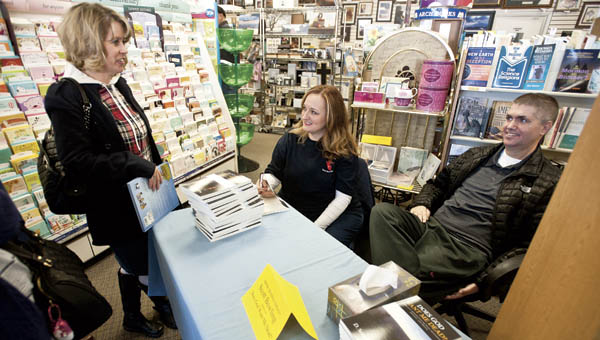 Bowling started writing the book in 2012, soon after he was diagnosed with Lou Gehrig’s disease, or ALS.

“Judge Bowling’s family contacted us for an opportunity to get more exposure on the book and to get the message out there,” Fred Kilver, who owns the store with his wife, said. “It’s a great opportunity to see Judge Bowling first-hand and get a chance to talk to him.”

Bowling wrote “Does God Want Me Dead?” to include personal accounts of his previous missionary work and how he has dealt with his diagnosis and prognosis as well as talking about various Bible passages.

“Sometimes signings go well and sometimes they don’t, but this one has been very well received,” Kliver said. “We’re very pleased.”

Assisting Bowling with the signing was his helper, Kirsten Mootz.

“The response is phenomenal,” Bowling said. “It’s great to see people that I haven’t seen in a long time. I feel like I’m sharing some lessons that God has taught me, and I hope to be an encouragement to others.”

“Does God Want Me Dead?” is available at Mustard Seed Christian Bookstore, located at 367 County Road 406, in South Point, as well as online at Amazon, Barnes and Noble and Jeremiah38.org.

The suspect in an alleged assault of a Briggs Lawrence County Library employee will be arraigned on Monday in Ironton... read more