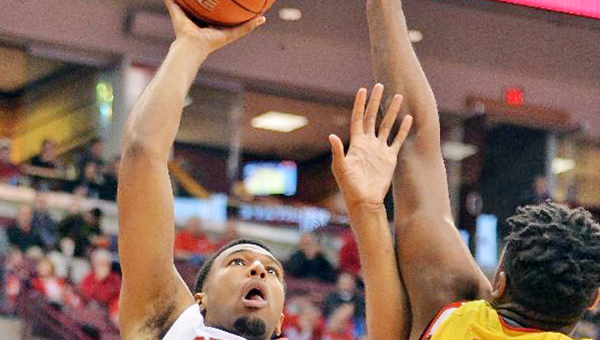 Tevor Thompson (32) of the Ohio State Buckeyes puts up a shot over Diamond Stone (33) of the Maryland Terrapins in the second half on Sunday at Value City Arena in Columbus. Maryland defeated Ohio State 66-61. (Photo by Jamie Sabau/Getty Images)

COLUMBUS (AP) — The freshmen on the Maryland roster had no idea what it would mean to get a victory at Ohio State.

Senior forward Jake Layman not only told them, but showed the way when the No. 8 Terrapins beat the Buckeyes 66-61 on Sunday to ease the memory of painful losses in Columbus.

Layman had 16 points, including the final six of the first half to give the Terrapins a 37-31 lead, and added 10 rebounds.

“He’s lost twice in the previous years he was here. Bad losses,” said sophomore guard Melo Trimble, who had 20 points. “So he wanted to come in here and win it. He played with a lot of heart.”

Maryland (19-3, 8-2 Big Ten) lost by 16 points to the Buckeyes in December 2013 as part of the ACC-Big Ten Challenge and a year and two days ago in its first visit to Value City Arena as a member of the conference then then-No. 16 Terrapins were upset 80-65.

“For the new guys it’s their first time playing here,” Layman said. “Guys from last year don’t really understand how important it was for me to come back in here and get this win.”

The Buckeyes went ahead 51-50 on Kam Williams’ jumper with 6 minutes left but Trimble hit two foul shots to regain the Maryland lead and the Terrapins secured the win with six free throws in the final 25 seconds.

“This game we came out with more energy, more effort against them,” Ohio State forward Jae’Sean Tate said. “We put it on all on the line. In the end we came up short.”

Trimble hit a 3-pointer from the left corner with 2:03 remaining for a 60-55 lead before Marc Loving made a pair of foul shots for Ohio State to trim the lead to three.

Prior to the trey, Trimble was only 1 for 9 from 3-point range but Maryland coach Mark Turgeon kept encouraging to fire away.

“I’ve got to stay confident throughout the whole game,” Trimble said. “Coach Turgeon relies on me to make those shots even when my shot’s not falling.”

“When the game was on the line our guys really stepped,” Turgeon said.

Maryland was able to work inside effectively and fouled out OSU center Trevor Thompson. The other Ohio State post player, Daniel Giddens, committed his second foul with 33 seconds left in the first half and his third 7 seconds later. “He’s a great shot blocker for them,” Layman said of Giddens. “It was great to get the two fouls. It kind of got the flow in our direction.” Giddens finished with four fouls.

Ohio State: The Terrapins’ 100-65 vs. the Buckeyes on Jan. 16 was the worst defeat for Thad Matta in his 12 seasons as OSU coach. He was more encouraged this time. “I’ve never been a big fan of moral victories. We learned a lot about ourselves over the course of a three-week span, or a two-speak. This team has grown up a lot.”

Ohio State is at Wisconsin on Thursday.