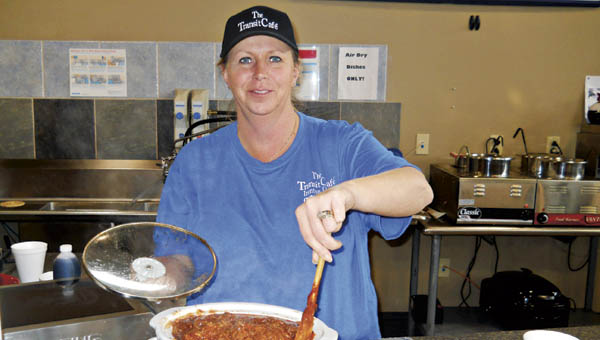 The wait is over for fans of the Transit Café. The popular diner on South Second Street re-opened on Monday with new owners.

Carol Kelly and Tim O’Bryan, both of Coal Grove, have partnered to bring the café back to Ironton after about a month closure by the Board of Developmental Disabilities that had been operating it.

This is Kelly’s first venture in the restaurant field but she has one of the basic skills for running the café.

“I love to cook and I saw this as an opportunity,” Kelly said.

“I’ve always wanted to do this.”

Monday was the soft opening for the restaurant that serves breakfast and lunch opening up at 7 a.m.

“I was nervous,” she said. “I wanted (business) to be steady. I was afraid I would be overwhelmed. But so far it’s been pretty good.”

Kelly is keeping the same basic menu of sandwiches and salads, but there are a few additions.

One of those is a Reuben sandwich.

“When we started talking about doing this, several people asked if we could have a Reuben,” Kelly said.

“If you want something, we will add to it,” Kelly said. “If there are any special requests, if we get enough of them, we will add it.”

Also she is considering serving breakfast throughout the day.

The café will have a grand opening later in the month. Hours are 7 a.m.-3 p.m. Monday through Friday.

Will be in court on Thursday The man facing felonious assault charges in the alleged attack on a Briggs Lawrence... read more