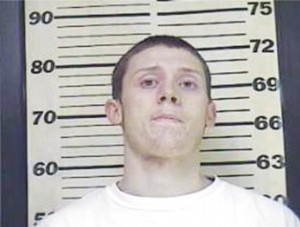 The. U.S. Marshals Service is looking for an Ashland man who is alleged to have committed a sexual assault of a teenager.

Brandon Tyler Scites, 25, whose last known address is on Mound Street, is being sought on charges of second-degree rape, second-degree sodomy, unlawful transaction with a minor and a parole violation (absconding).

According to a news release from marshals, Scites may be staying in or around the area of Kitts Hill in Lawrence County.

Marshals said Scites knowingly engaged in sexual intercourse with a minor younger than 16 who was incapacitated due to an intoxicating substance on Jan. 21. He is also alleged to have caused a minor to engage in the use of marijuana.

Deputy Marshall Michael Blackburn said posts threatening law enforcement officers if they attempted to arrest him have been posted on social media on an account attributed to Scites.

Lawrence County Sheriff Jeff Lawless said deputies were contacted by Ashland police, who initiated the search, and have visited a residence in Kitts Hill where Scites may have been staying. He said Scites was not located after a thorough search of a home, barns and trailer at the property, and that they do not believe he is still in Lawrence County.

Blackburn said Scites contacted law enforcement on Sunday and was told he was wanted for questioning. He said Scites gave false information and stated that he was in South Carolina, but marshals had proof Scites was at his mother’s residence in Kitts Hill until at least Tuesday.

Blackburn said Scites may attempt to travel to either Lexington, Kentucky or Huntington and is seeking help to leave the area.

Marshals said Scites is considered to be armed and dangerous and should not be approached. Anyone with information is asked to contact Blackburn at 859-361-5647. All tips are confidential.