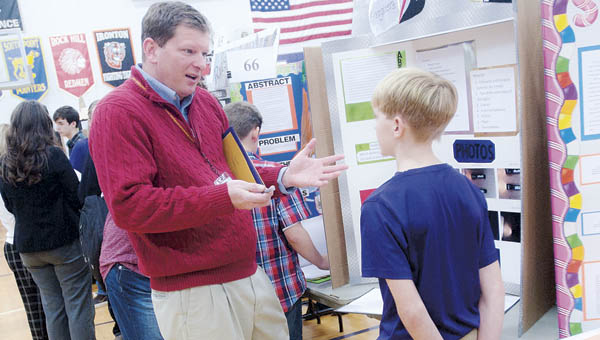 CHESAPEAKE — Middle school students from across the county competed in the Lawrence County Science fair at Chesapeake Middle School on Thursday.

The students, 132 individuals and 16 teams, who were winners from competitions at their individual schools, set up their projects in the school’s gym and presented their findings to a panel of judges from the community.

Projects sought to answer such questions as “Can pop cans produce heat?” “Does music affect our moods” and “Are male or female dogs smarter?”

Zowie Rollins, a seventh grader at Chesapeake, looked into “brain freezes” that occur when one gets a cold drink. She measured the intensity of the freeze and how long it lasts by testing a Wendy’s Frosty, a 7-Eleven Big Gulp, a Taco Bell Freeze and Speedway freeze.

Both she and her grandmother drank the item fast and they would time the freeze when it took place.

She found that her grandmother was more susceptible to it. There was no significant difference, though, between the drinks, though the Big Gulp, which contains more ice, had a slightly longer effect.

Braydon Gilpin, an eighth grader at Chesapeake, asked the question “Can I make a paper tube support my weight?”

He took the cardboard roll of a toilet paper tube and tried packing it with salt, sand, popcorn and marbles.

He hypothesized that the tube filled with marbles would be the one to support his weight, as he stood on a book on top of the tube, but all methods failed, except for the salt.

Gilpin said he thought it was due to the finer grain of the salt, which compacted it more when pressed.

To test it, he used a chamber designed for measuring lung capacity and tried an air sample with and without a plant.

He found the sample taken from the chamber with the plant was cleaner and had less volatile organic compounds.

“I got the idea from watching crime shows,” she said.

France took an old teddy bear and covered it with fake blood, then had someone hit it with a blunt instrument, splattering the blood on a drape.

She hypothesized that, using a string method, she could measure the velocity, angle and height of the splatters to determine the type instrument used.

While her first results were messed up slightly by the rain, she found the following two tests more conclusive and proved her hypothesis.

Julie Walters, student services coordinator for the Lawrence County Educational Service Center, who organized the fair said the event follows the Ohio Academy of Science in judging the projects.

Judges score the students for knowledge of their subjects, effective use of the scientific method, clarity of expression and originality and creativity.

Waters said the science fair is important because it teaches students about research and the scientific method. She said the oral presentations are especially helpful and gives teens a chance to practice speaking to an adult and presenting information.

“They learn the importance of making eye contact,” she said.

She said the projects were not done in class and gave students an opportunity to work on their own.

She said ribbons would be given to projects deemed “superior,” “excellent” or “good” in the fifth/sixth grade and seventh/eighth grade competitions.

Three trophies will go to the top three overall projects.